This minimalist interior for lovers of Japan by Antonina Dorofeeva is permeated with references to classical and modern Oriental culture.

«The concept of style in modern interiors has almost blurred. I like metaphorical designations, for example, «Louis XIV in sneakers,» designer Antonina Dorofeeva reflects on her new project. — And I would call this interior «Yoji Yamamoto’s vacation in Moscow».

And indeed, here you can find minimalism, avant-garde, functionality, and apparent simplicity, behind which there are thoughtful details. Everything that is characteristic of one of the main philosophers in the fashion world.

When I wanted to add colors in the living room, a mustard sofa from Felis appeared, and in contrast to it, BoConcept armchairs in a shade of pine needles with a voluminous boucled texture of fabric. Paired coffee tables, Baxter. Console, shelves, carpet — BoConcept. 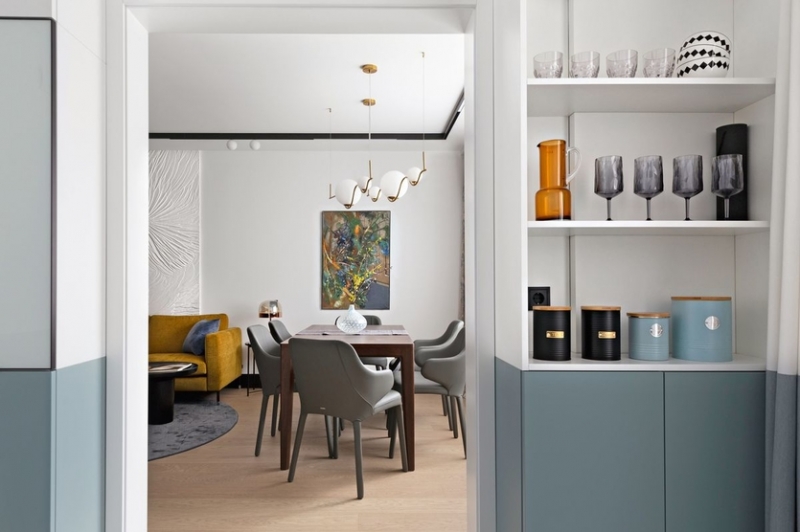 There wasn’t much usable space in the kitchen. The designer got out of the situation by designing shallow built-in cabinets opposite the work area and moving part of the storage there. Dining group, Cattelan Italia.

The owners of this apartment are a family with an adult son, he studies Japan at MGIMO and collects a huge collection of comics. This determined the vector of the design concept and set the mood for the whole work. «The original layout was an ordinary «shirt». But we removed the partition between the living room and the corridor and thereby significantly expanded the space of the common area, where guests get immediately from a small hallway, — says Antonina. — The mirrored door at the entrance leads to the dressing room. This solution allows you to dress comfortably both inside and outside, before going outside.» Two bedrooms are designed in the back of the apartment. Moreover, contrary to the classical approach, they decided to give a larger room to their son — so that there would be a place to place shelves for comics. 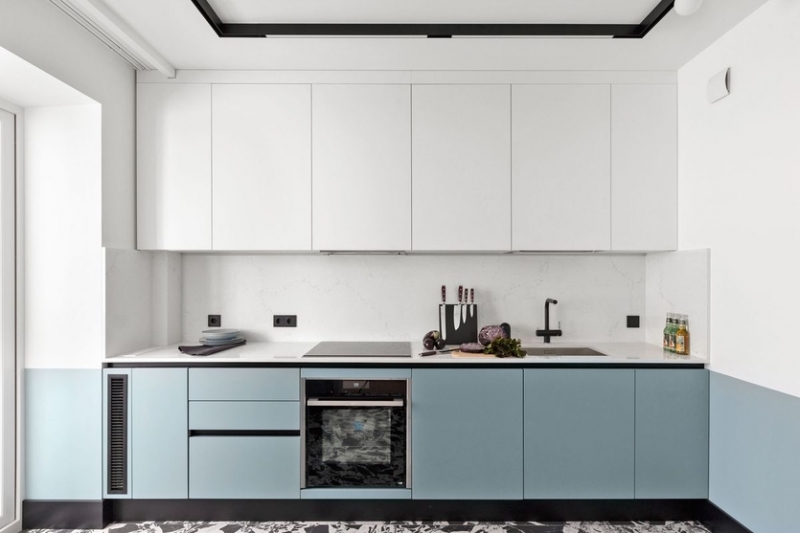 «There is a lot of light in the kitchen — it helps to wake up faster! We left everything above the waistline completely white, and made the bottom around the perimeter gray-blue,» says Antonina. Kitchen, Aran Cucine. Tile, 41zero42. 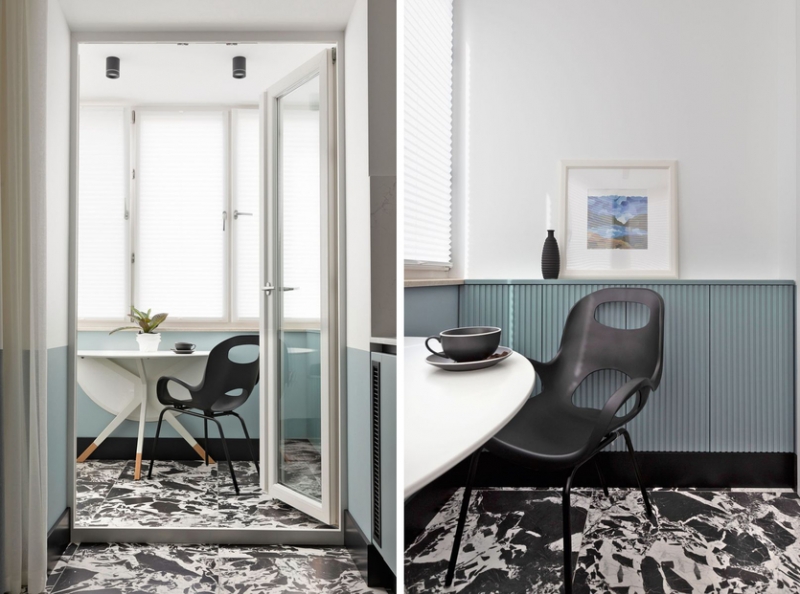 The architect insulated the loggia, and now it serves as a breakfast area in the kitchen. Monochrome chairs from Umbra by Karim Rashid and the BoConcept table are combined with Kerama Marazzi granite.

The master bedroom turned out to be very compact, but the mirrored facades of the cabinets and the vertical behind the bed visually expand the small volume a little. «We wanted to make neat references to Japan so that the interior doesn’t look too dry and minimalistic,» explains the designer. In this project, she worked carefully with the color palette. I took classic white as a basis, painting almost all the walls with it. The black lines of the skirting board, the tracks of the lamps, the framing of the doors bring the graphic and contrast characteristic of Japanese conceptualism. The monochrome theme can also be traced in the rhythmic pattern of the floor tiles imitating the terrazzo pattern. At the same time, each zone has its own companion color. For example, in the kitchen, the combination of white with gray-blue passes from the furniture to the walls, from the walls to the curtains and then goes to the balcony, thereby combining the entire volume of the room. 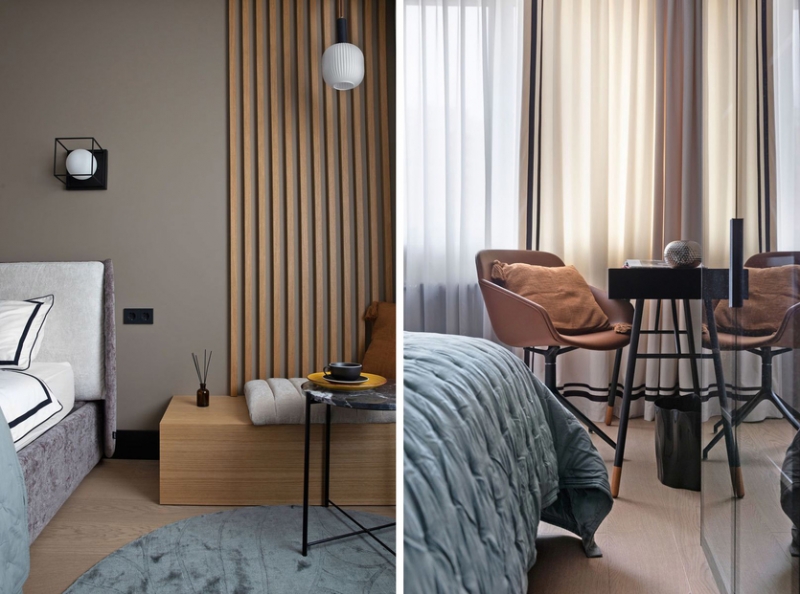 The son’s bedroom is also filled with black graphic elements. Vertical wooden slats on the wall serve as the back of a small banquette. The bed, Felis. Desk, chair, carpet, everything — BoConcept. 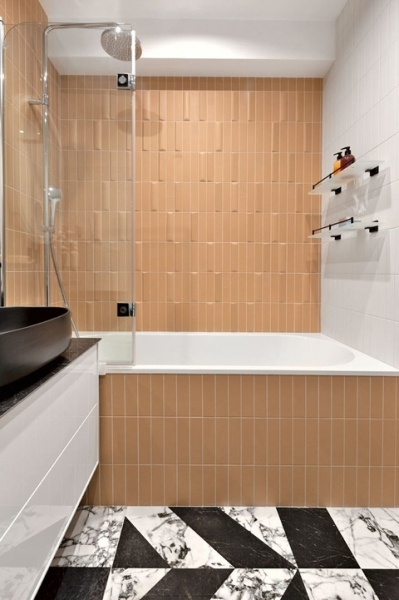 The textured wall behind the bathroom was laid out with light terracotta tiles of different lengths (41zero42). Paul, Kerama Marazzi.

The red tone associated with Japan acts as an accent in the bedroom in the form of a headboard wall, and in the shower room it dilutes the completely white space with a large spot on the ceiling. The bathroom is made in contrasting colors of light terracotta, gray-green and dark gray. The walls in shades of cappuccino in the son’s bedroom create a pleasant «enveloping» atmosphere, and also serve as an unobtrusive background for a bright collection of comics on the shelves. 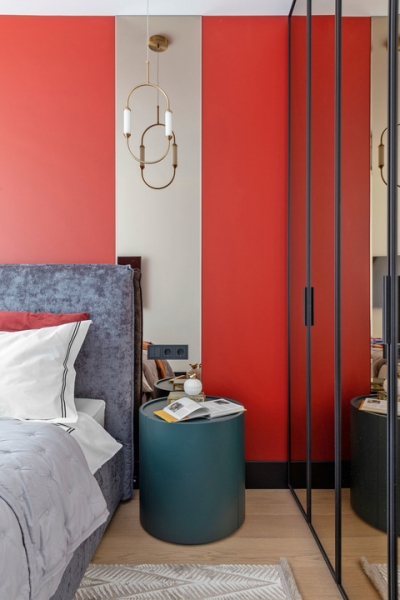 In the parents’ bedroom, red accents symbolize Japan. Sangiacomo cabinets were chosen cylindrical in shape so that the cabinet doors could open. The bed, Felis.

The author uses an indispensable component of the Japanese style — natural materials. Laconic wooden slats are an important link in this interior. They run horizontally along part of the ceiling of the living room and hallway and vertically «descend» in the son’s room — on the wall and on the facade of the built-in wardrobe. Japanese aesthetics can be traced in floral compositions and symbolic decor. «An architect certainly has the right to his own style. But it’s boring for me to move in too built‑up framework, I still want to play space creation with the customer. Most often they are very interesting people, you want to be inspired by them. Even if the client just gives the keys to the apartment and does not participate in the process, then the person himself, his interests, history, path is always very curious,» Antonina sums up. 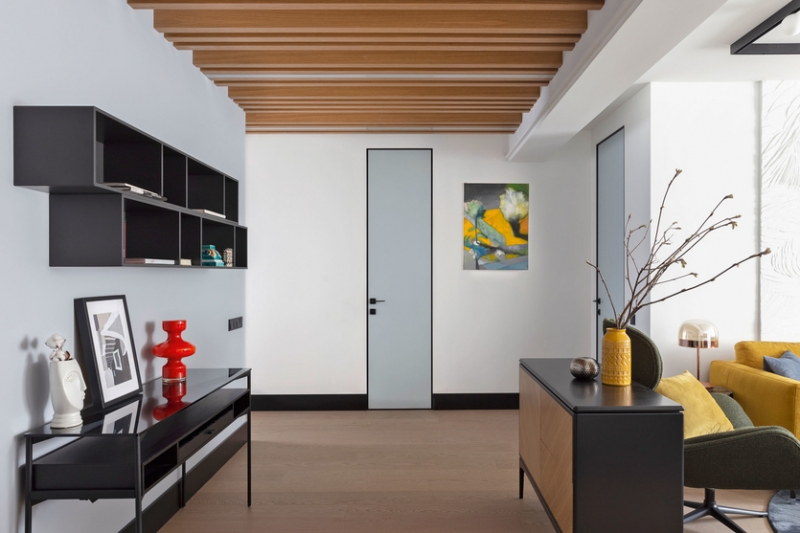 The doors (Union) were specially designed to be as high as possible in order to visually raise a very low ceiling. 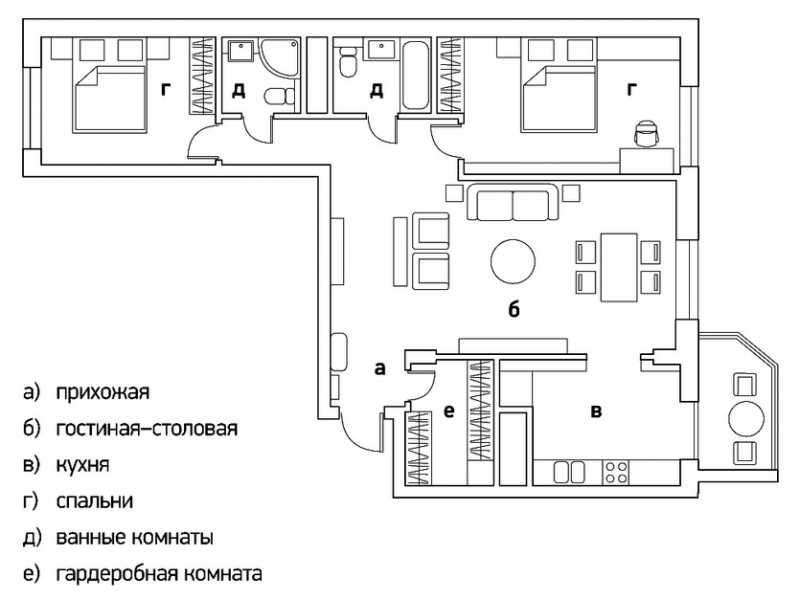 Announcements of new materials, interiors by professional architects and designers, selections of beautiful furniture and home decor. Subscribe to our channels so as not to miss the fun!
zen.yandex.ru/salon.ru
t.me/salon_magazine
vk.com/saloninterior