Residents of a house hidden in a forest near Moscow watch the play of light and shadow every day. After all, architect Alexey Pochevalov designed it so that the sun always accompanies this interior.

Desperate to find a ready-made solution for suburban life, a young family with three children decided to purchase a plot and build their own house «from scratch». For help in the construction of the building and the development of its design concept, the customers turned to architect Alexey Pochevalov, who has already done several projects for them. 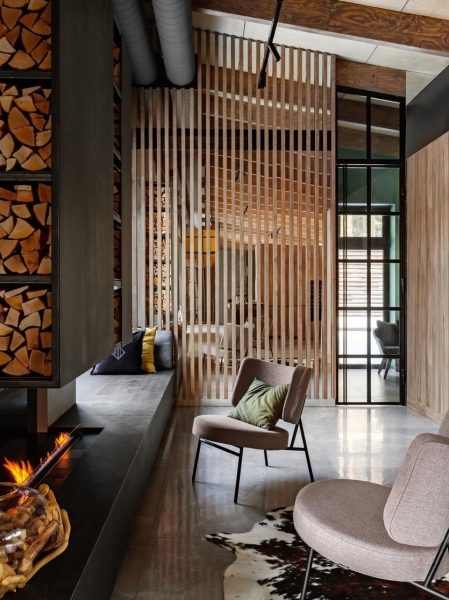 Initially, a wood-burning fireplace with a chimney was designed in the house, but during the construction process it was decided to replace it with a bio-fireplace that can be controlled via a smartphone. 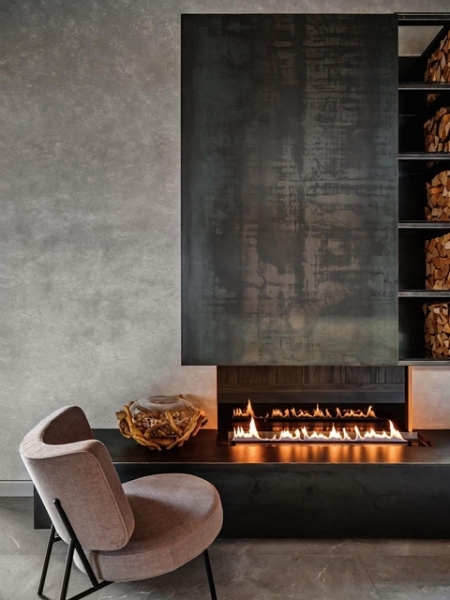 The bio-fireplace is built into the podium combined with the window sill. It was sheathed with steel sheets and a radiator was put inside. The upper part of the fireplace is lined with hot-rolled steel sheets. 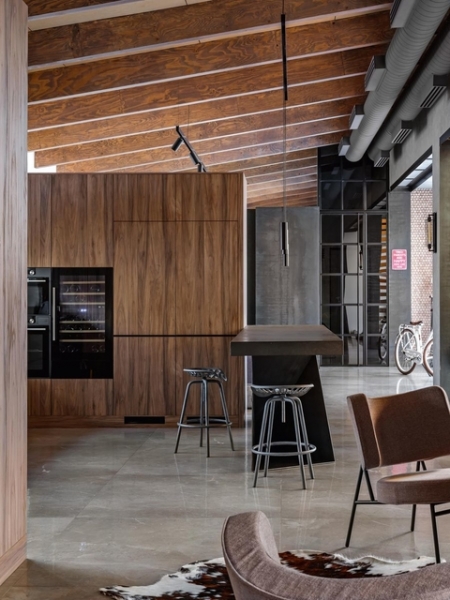 View from the fireplace room to the kitchen-dining room.

The house plan resembles a «4» in shape. «This is not accidental,» says Alexey. — When the construction was underway, the plot in the village was also under number 4, and we had already agreed on the design of the gate and gate, stylized under this figure. But then there was a change of numbering in the village, and our house was assigned the number 67. We had to change the design of the entrance area, where we put a concrete stele with stylized numbers 6 and 7″. 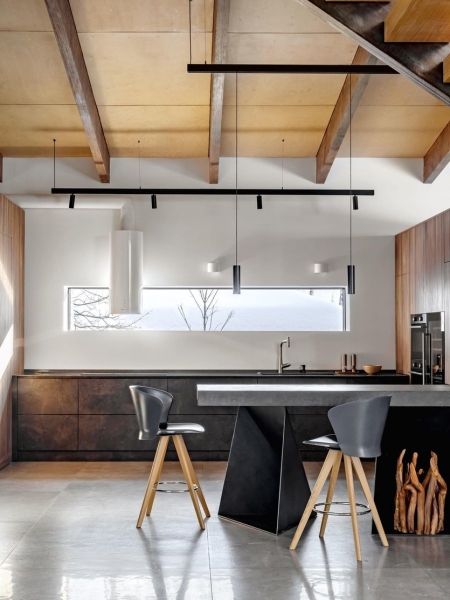 The kitchen area corresponds to the minimalist spirit of the entire interior. The facades of the lower cabinets have a «dark concrete» pattern, and instead of the upper ones there is a long window. By the way, the window designs throughout the house are made so that the framing is not visible: the slopes fit directly to the double-glazed windows, and it feels like there are no windows at all — only open openings. 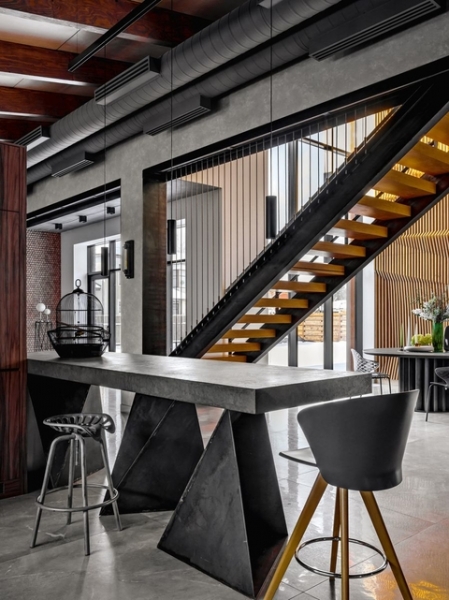 The countertop of the bar is made of plywood and covered with micro-concrete, the base is three pyramids of steel sheets with a thickness of 8 mm. Before manufacturing, the architect designed a life-size cardboard mock-up, and the object itself was named Stonehenge. 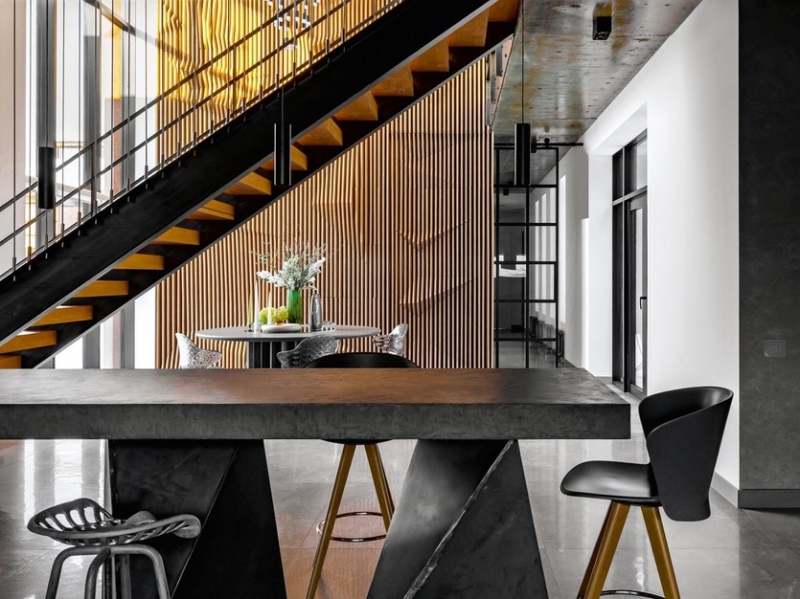 View of the corridor leading to a private block with bedrooms.

Initially, all the rooms were supposed to be located on the same floor. But a fairly small plot and existing urban planning regulations have made their own adjustments, so the office, guest room and gym-game room «moved» to the second floor. The first level consists of three blocks: a common area (entrance hall, living room, kitchen, dining room, spa), children’s rooms with their own bathroom and a master bedroom with a bathroom and dressing room. There is also access to terraces and a courtyard surrounded by a forest and closed from neighbors by the main volume of the house. In general, the green «hedge» of the forest area and orientation to the cardinal directions had a strong influence on the layout of the object. 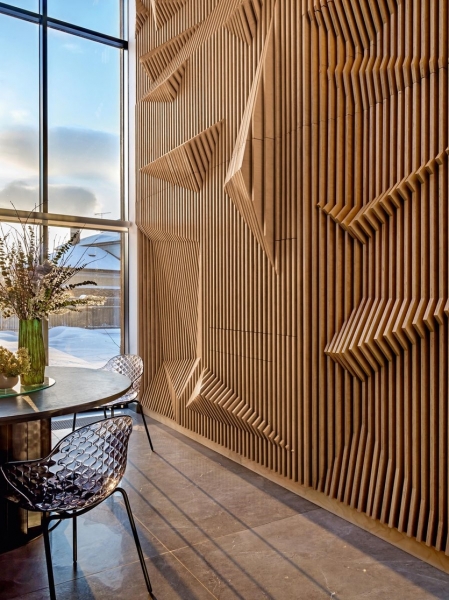 The main element of the two-light space of the dining area was a relief wall of plywood lamellas assembled into an abstract composition. Behind them, there is an air conditioner and an air duct system that provides the atrium with a comfortable temperature in the summer. 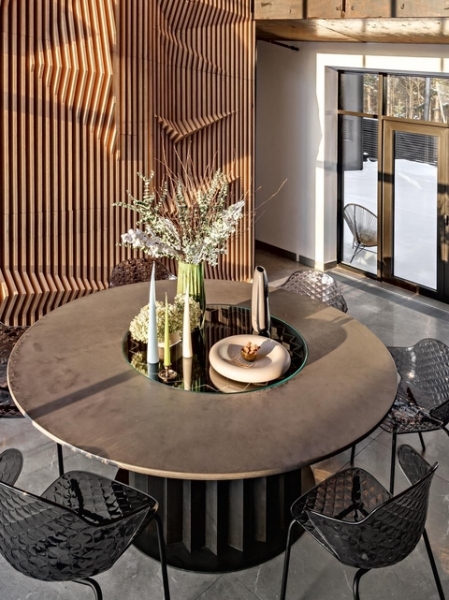 The table is made according to the author’s design of Alexey. The base is made of steel corners welded together in the form of a ring, the table top is plywood covered with micro-concrete, with a round central insert made of glass. 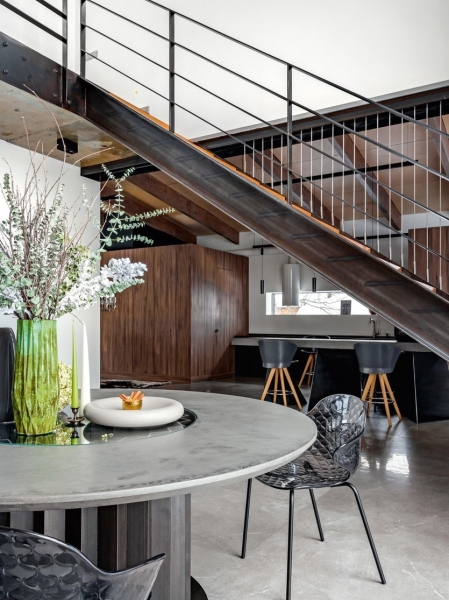 The stair railing on one side is made in the form of vertical strings of steel cables, on the other — of a steel strip. The skewers are made of steel channel, the steps are made of plywood.

The architect wanted to guarantee the privacy of the family, so the neighbors have a minimum number of windows. At the same time, he strove to keep the interior space airy and bright at any time of the day. Therefore, the common area faces north, south, west and east at the same time, and the atrium is always permeated with the sun. Children’s rooms and a large window on two floors in the dining room are also oriented to the south and receive the maximum amount of sunlight. And in the rooms of the second floor, attic glazing was additionally designed for constant natural lighting.

Fragment of a living room with a sofa and TV. To enliven the gray-white scale, Alexey added bright accents — textiles, decor, a picture in pastel colors. Some fragments of the ceiling were decided to be preserved in concrete, and the beams of the roof structure were left open in the common area. Floor lamp, Pallucco. 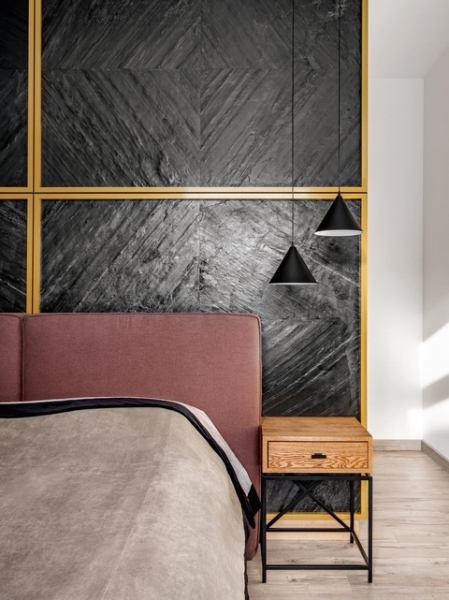 In the parents’ bedroom, the wall behind the headboard is lined with panels of natural black slate enclosed in steel frames. Behind it are the closets of the dressing room. 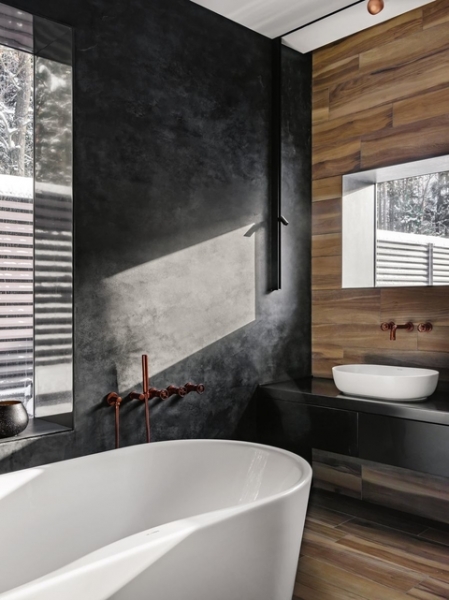 The windows in the master bathroom overlook the forest, and the walls are partially covered with black granite, tiles for wood and decorative plaster for black concrete. Bath, Kolpa-San. Sink, Duravit.

«Due to its location, the whole house is permeated with the sun, and in its different zones you can follow the play of light and shadow,» Alexey comments on the idea. — In the afternoon, when it penetrates through the stained-glass window of the dining room, on the accent relief wall, you can observe how the paintings created by the rays on the «canvas» of plywood lamellas change every minute. In the layout, we also tried to keep the maximum space and fill the interior with air. The internal volume made it possible to make several perspectives at once — also a kind of rays. For example, from the front door we can see the spa area, and the length of this straight line is 22 meters. We laid the same, but 24-meter beam between the windows of the kitchen and the children’s bathroom. These perpendicular lines emphasize the depth of the free space.» 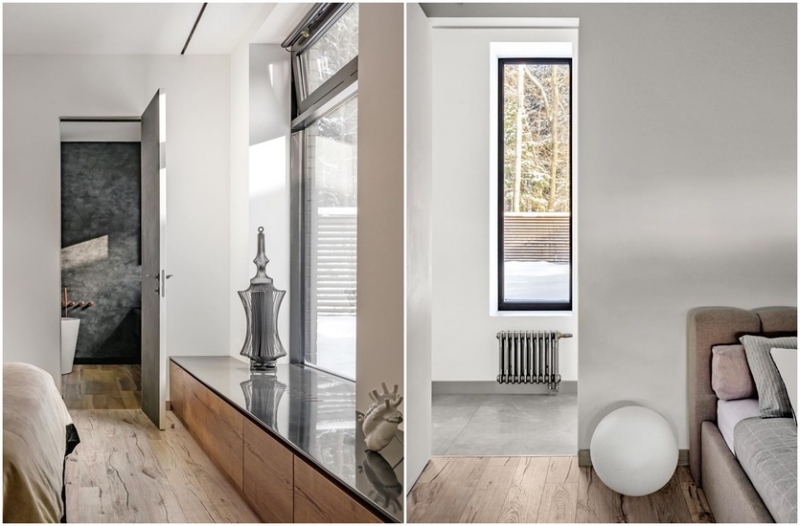 A long chest of drawers runs along the window of the parents’ bedroom, the countertop is made of acrylic stone, and a window sill is integrated into it. This is another place to relax, where you can put pillows, relax and watch what is happening in the courtyard. 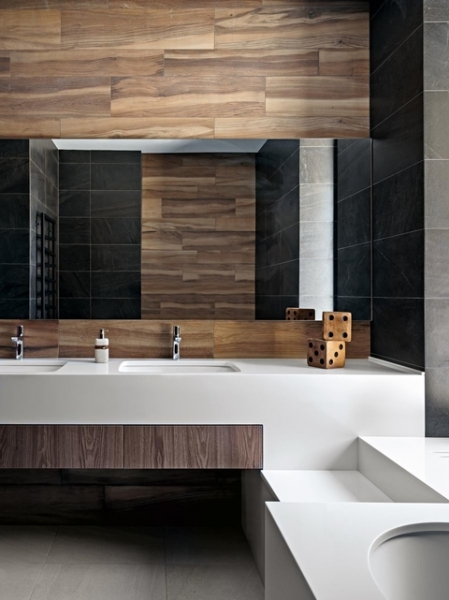 In the children’s bathroom, the designer used two types of ceramics: wood (Caesar) and natural black stone (Italgraniti). The bath box is made of artificial stone and goes into the washbasin.

The stylistic standard was the modern private architecture of Scandinavia with an emphasis on natural materials, and the interior decoration of the house is its logical continuation. The aesthetics of the loft and industrial design are very close to the customers, therefore steel, concrete, natural wood, plywood are present in the interior. The floor is covered with large-format granite for concrete. The main color of the walls is white, some fragments are sewn with a wooden rail and sheets of black hot-rolled steel. The ceiling is also characterized by concrete and open beams of the roof structure, with varnished plywood between them. Along the ceiling of the common area stretch unmasked ducts of the ventilation and air conditioning system. 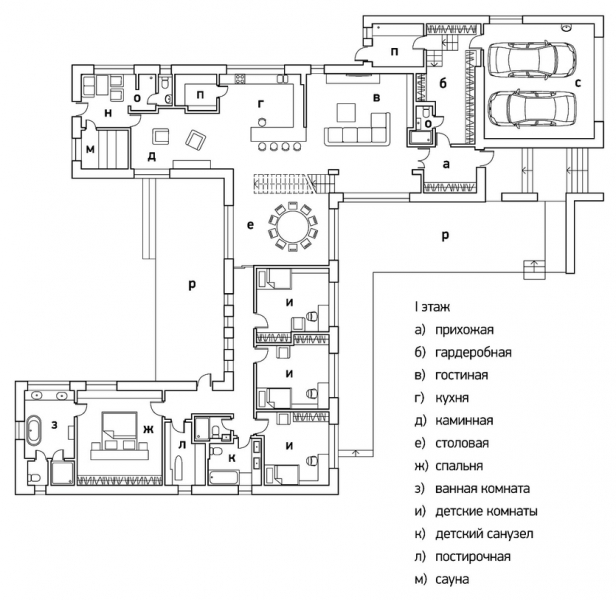 The layout of the first floor of the house. 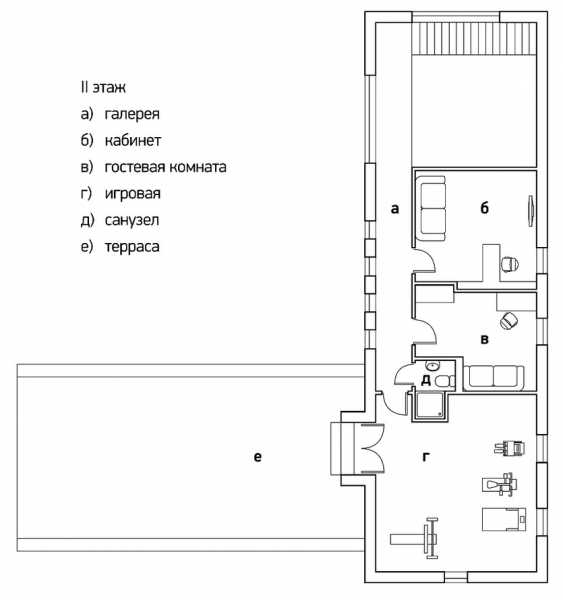 The layout of the second floor.