The garden is only a few years old. The designers of the landscape bureau «Moss» have created an extremely romantic stylization of an old manor

The customers of this project in the Moscow region dreamed of a real ancestral nest and built a house in the spirit of an old Russian manor. The park was also supposed to refer to centuries-old traditions. At the same time, it was created completely from scratch. Designers from the landscape bureau «Moss» have divided a plot of 32 acres into several semantic zones, combining them with a common atmosphere of thoughtful, melancholic suburban evenings. 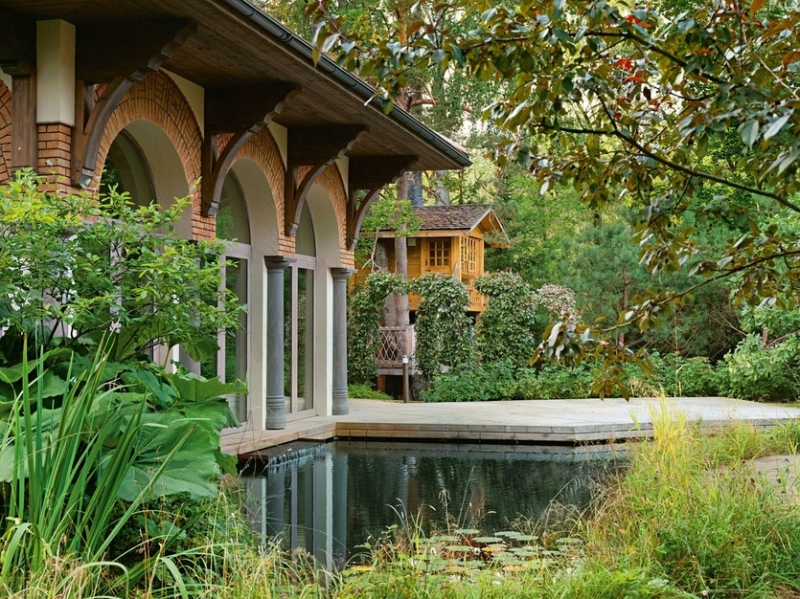 At the far end of the reservoir there is a pavilion with a summer kitchen (in the foreground). At the bottom of the garden behind it is a real tree house made for the children of the owners.

The romantic fleur of the park is given by man—made «ruins» — as in the English estates of the XVIII century, where similar images were also often encountered, and they were created intentionally. In this case, a brick wall with arches and a staircase serves, on the one hand, as a structural element, being a support for the upper terrace of the park. On the other hand, it becomes a spectacular decoration, hiding outbuildings and a garage so that they do not destroy the visual integrity of the romantic landscape. 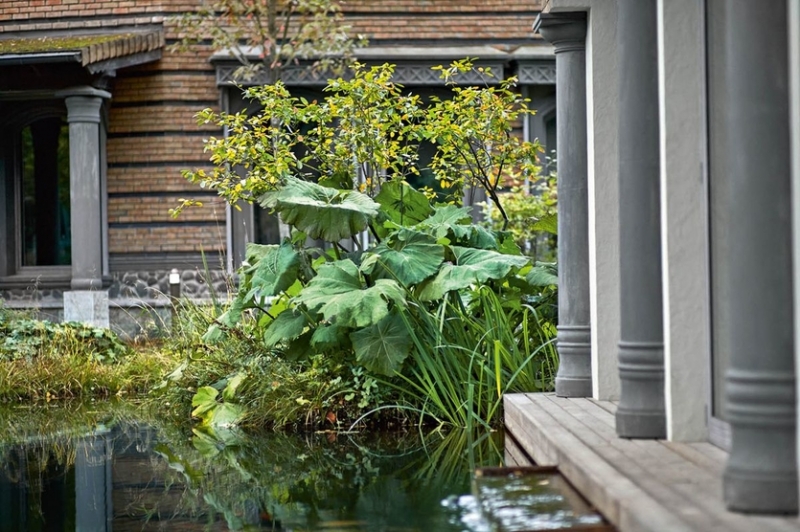 Irga, irises and astilboides are planted around the pond. 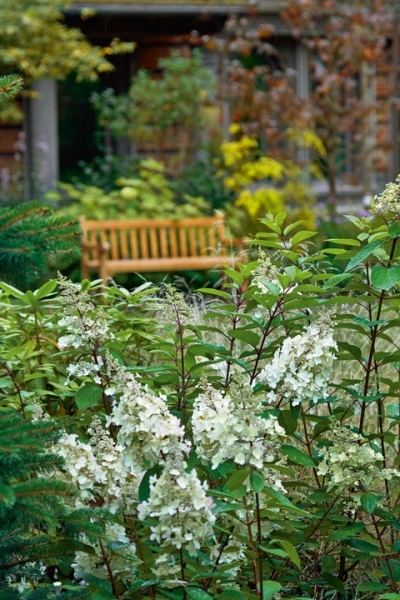 There are benches here and there in the park, where you can sit down with a book.

Another compositional landmark that determines the vector of movement in the park is the pond, also generated by the imagination of designers. A fairly large pond is located right in front of the house. It is maintained in excellent condition. Koi carp were even launched here. The pond is skirted by a path lined with sandstone.

Customers dreamed of a real ancestral nest: both the house and the park had to refer to centuries-old traditions

In some places, the edges of the slabs are specially chipped off to give the impression that the park is more than one hundred years old. The designers sought to emphasize the atmosphere of the estate, which passed from generation to generation. Picking up plants, they focused on those that, growing, create the impression of a romantic, picturesque park, in the thicket of which you can get lost, giving yourself up to a measured walk. 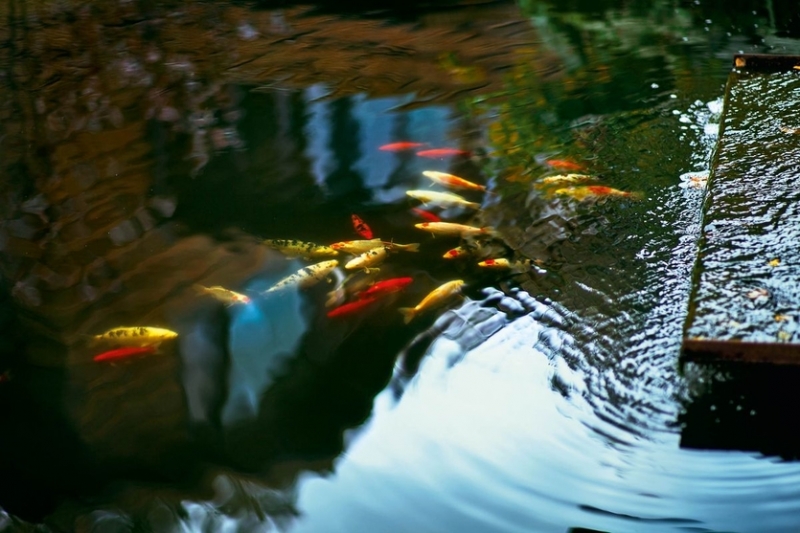 Carp were launched into the pond. 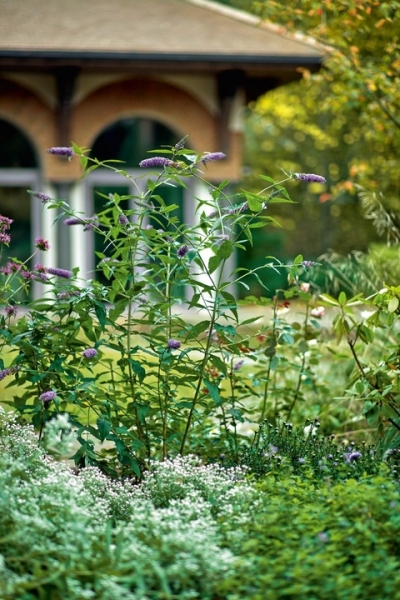 For the mood of light melancholy in the garden, David’s buddleia and pearl anafalis are responsible.

So, irga, irises and astilboides (a plant similar to burdock) are planted around the reservoir. And real thickets have been created around the brick wall, almost hiding it from the side of the house. Here again, irga dominates — a shrub with a wide crown, a dome that grows quickly and luxuriantly. 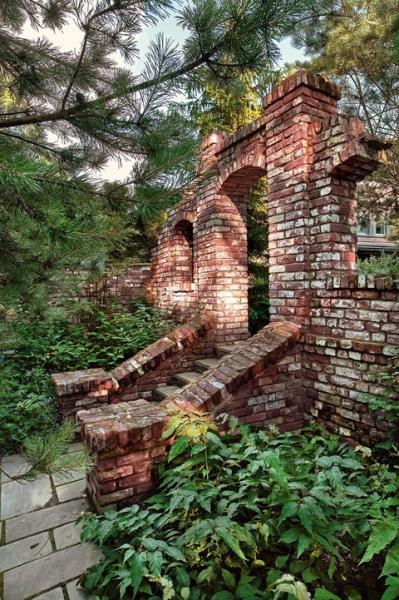 Shade-loving plants are planted near the «ruins». In particular, such a perennial as astrantia. 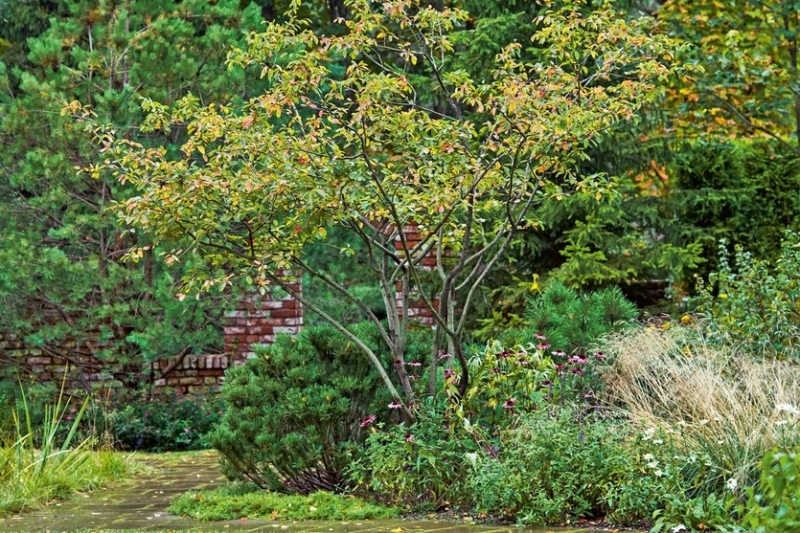 The brick «ruin» is almost invisible behind the overgrown crown of the irga.

Announcements of new materials, interiors by professional architects and designers, selections of beautiful furniture and home decor. Subscribe to our channels so as not to miss the fun!
zen.yandex.ru/salon.ru
t.me/salon_magazine
vk.com/saloninterior