Designer Inna Myers designed an apartment for a young successful businessman. The starting point when creating the design concept was the owner’s passion for motorcycle racing and his love for Harley Davidson.

The apartment is located in the Moscow residential complex «Heart of the Capital». The owner is a young successful man. He works a lot. In addition to business, his main passion is motorcycles, namely Harley Davidson. «Initially, I was recommended to him for designing a biker club,» adds the author of the project Inna Myers, «But after a while he called with the question: do I do apartments? We immediately found a common language. I like to work with this type of people: everything is clear, understandable, less words — more business.» 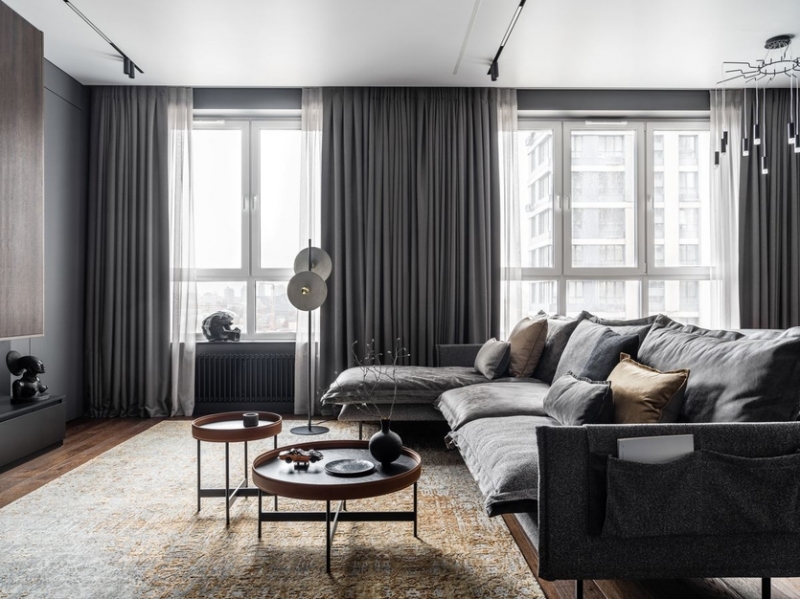 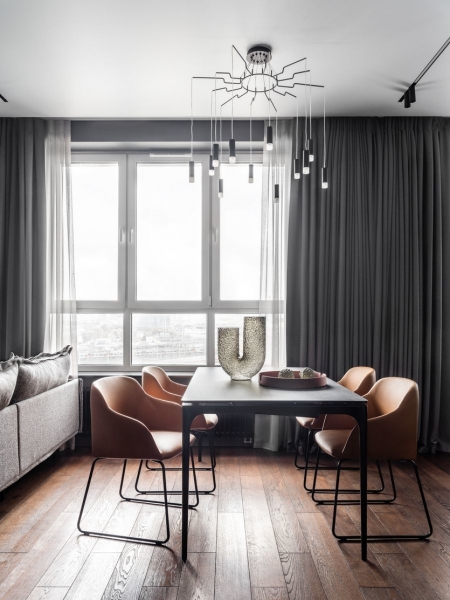 In the planning plan, the space has not undergone significant changes. The designer only slightly expanded the area of the master bathroom due to the corridor and the transfer of the entrance, and also increased the area of the guest bathroom to accommodate washing and drying machines. 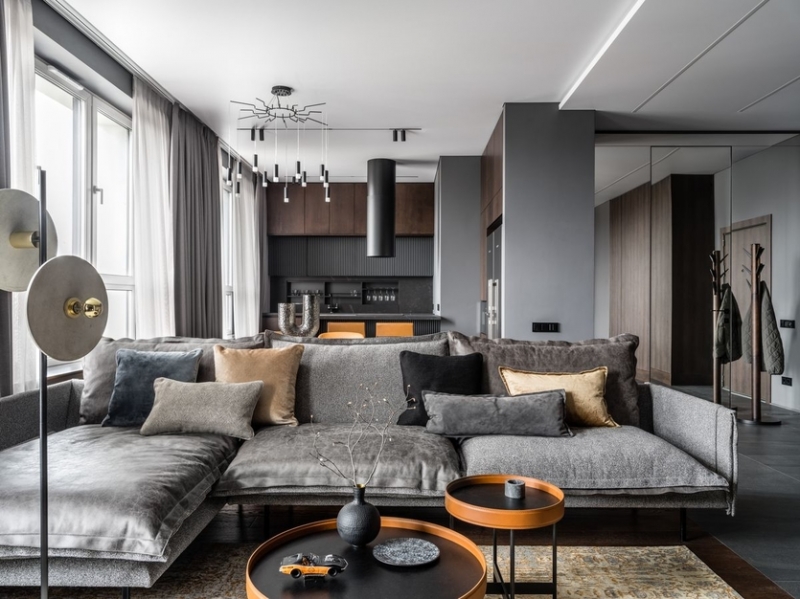 The door to the guest bathroom (on the left) is visually dissolved in mirrors. The photo clearly shows how, with the help of columns, the designer has slightly expanded the kitchen space. The columns have a microwave and refrigerator side-by-side. 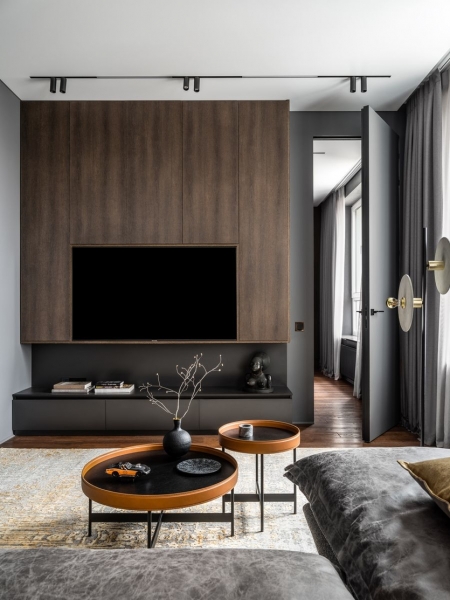 Additional storage is provided behind the panels in the TV area. Coffee tables, Calligaris.

Despite the open layout, it was not possible to significantly increase the kitchen area. This was hindered by the riser, located already in the short space of the kitchen. «It turned out that either the kitchen was pushed forward by 20 cm, or it was necessary to sew up the box and lose part of the workspace,» Inna comments. — But we found a way out. The placement of a sliding mechanism with additional storage spaces in the apron area allowed the functional use of these 20 cm and save space on the countertop. However, we calculated the distance between the headset and the island by millimeters: when you have an oven and a dishwasher opposite each other, there is a great risk that something will not open at the slightest miscalculation. An additional solution to the problem was an oven from the Neff line with a door that ergonomically leaves and hides under the body. In terms of saving space, I would recommend this particular model.» 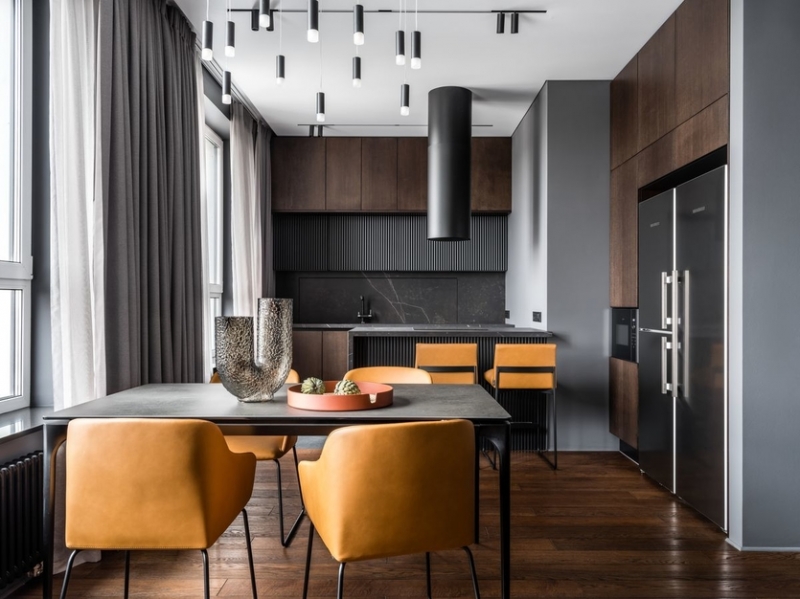 «The kitchen was initially chosen by the customer himself,» Inna Myers notes, «but it seemed to me an unreasonable overpayment. As a result, we saved a very decent amount, without compromising quality, by choosing the kitchen furniture of the Arredo3 factory. The owner likes to cook. That’s why we have a Dekton countertop that doesn’t leave scratches, and good Neff household appliances.» 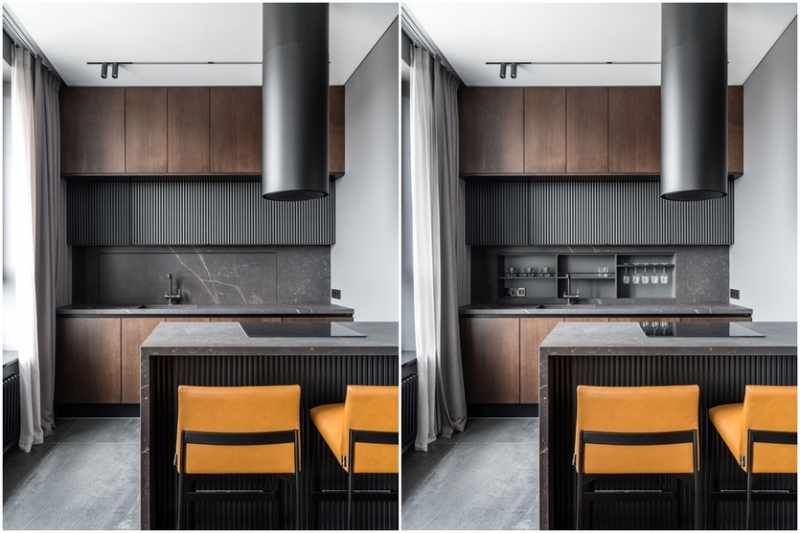 The kitchen area is the most difficult element, which takes the most time during design and installation. Despite such a small area (with 2.6 m on the wall laid on it by the developer), it was possible to place both an island and a large side-by-side refrigerator, and a kitchen apron with a retractable mechanism that covers sockets and additional storage spaces that can be used for glasses, spices and so on. Kitchen, Arredo3. Chairs, Calligaris.

One of the important wishes of the customer was a dressing room. But in the process of working on the layout, it became clear to the designer that, like in the story about seven hats made of one skin, he would have to abandon it. Instead, roomy storage systems appeared throughout the apartment. The largest of them is located in the hallway-living room: motorcycle helmets and other uniforms are stored here. The designer also provided storage in the TV area — the systems are hidden behind veneered panels. In the bedroom there is a large spacious wardrobe and a small one next to the TV stand. In general, every meter of space is used wisely and usefully, and at the same time the apartment does not look overloaded. 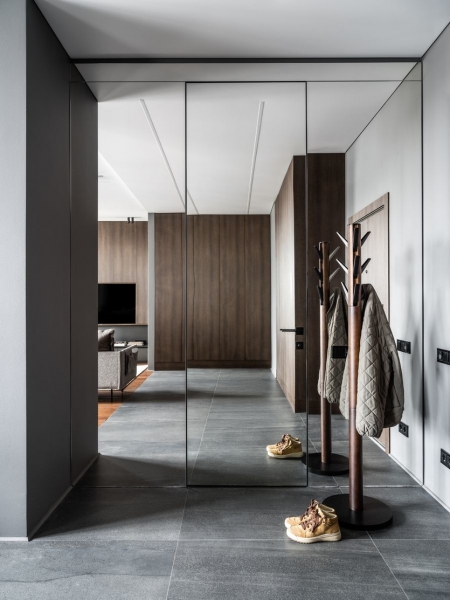 Since there is practically no hallway area, the space is visually divided with the help of materials. The hallway is highlighted with granite and is supported by a lowered ceiling level and light lines located perpendicular to the light in the living room and kitchen.

«I like to work in a modern style, when a lot of attention is paid to functionality and practicality,— Inna explains. — And the game takes place at the level of semitones, textures, point-exposed light. The interior should correspond not only to the owner, but also to the place: the residential complex, the view from the window. And in this project, the choice of modern style is absolutely logical.» 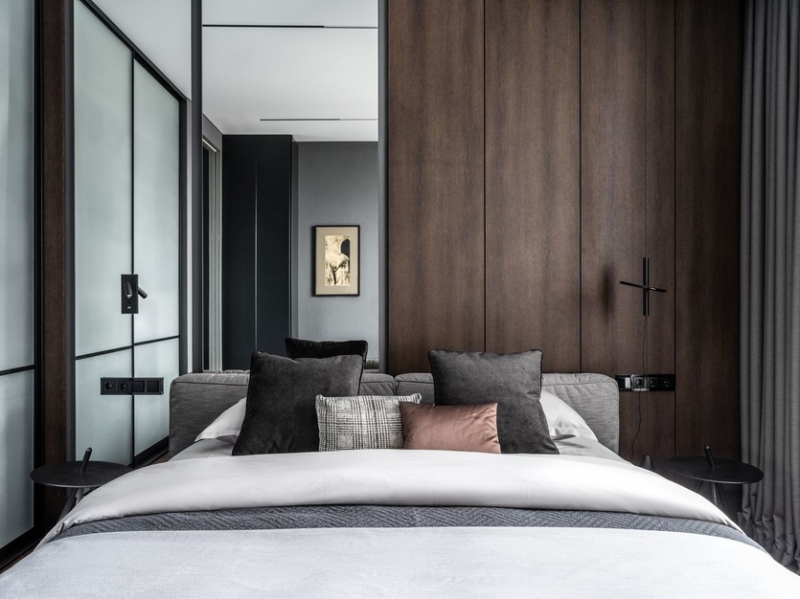 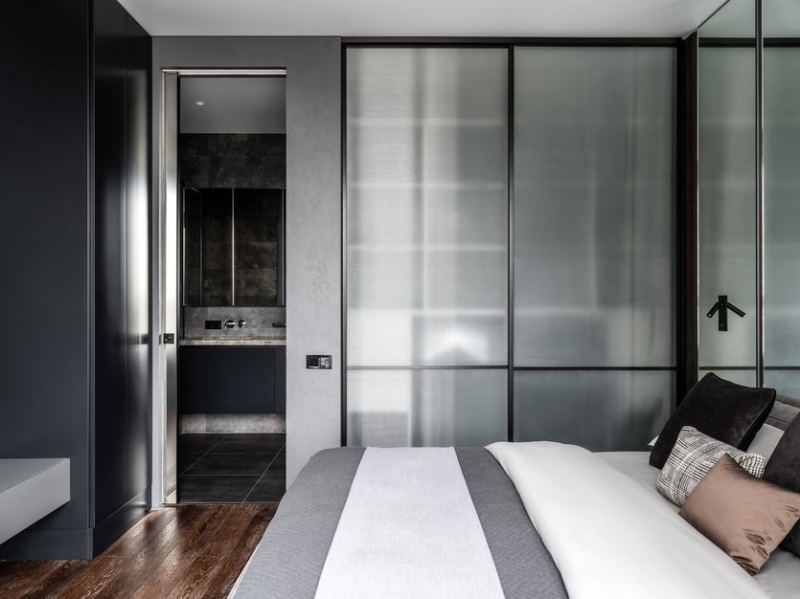 Bedroom. The bathroom door is visually hidden in mirrors, which further expands the dark interior and breaks the strict rectangle of the room. Gray decorative plaster with a rough texture of concrete in the finish and gray tiles in the bathroom create a holistic composition. In addition to the main light and sconces, there is a muted ceiling illumination, passing in a single line behind the mirror panel at the head of the bed. In addition, there is a backlight inside the built-in cabinet, which performs the function of a «night» lighting option.

The entire interior is designed in a single color scheme — these are shades of graphite and gray plus bright orange accents. The guest bathroom with a rather bold red granite, «soothed» by gray panels, stands out a little from the general range. «The customer’s love for the orange color gave me carte blanche, and I was able to apply my long-loved Tuscania porcelain stoneware with a rust-like effect. It was perfect in color and overall theme. In general, it is very good to dilute dark monochrome interiors with warm saturated color. This adds comfort without killing the overall brutality,» the designer notes. 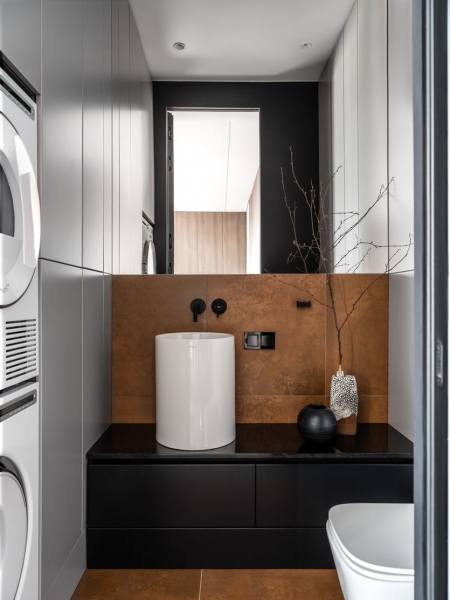 «I promote a policy: the main bathroom is about practicality, the guest bathroom is about showiness. Firstly, to cause the delight of the guests. Secondly, there is no need to place a large number of jars, brushes, etc. Nevertheless, our bathroom is also an economic unit. Gray panels on the right and left hide the cabinets where the household staff is stored,» explains the author of the project. Mixer, Cisal. Porcelain stoneware, Tuscany. Shell, Galassia Core. Toilet bowl, The Artceram. Vases, Victoria Malysheva.

The apartment provides a fairly large number of lighting scenarios. When designing, the designer always puts himself in the customer’s place and imagines how the lighting should be organized so that the owner (owners) is as comfortable as possible. «After work, I will most likely need a cornice lighting, not a big light,— Inna reflects. — The eyes will want to take a break from the bright light. I’ll go into the kitchen, pour a glass of wine and sit on the sofa with him. I will definitely need a floor lamp here. Getting up at night, I probably won’t want to turn on the main light, so as not to lose sleep completely. Based on this virtual tour, I am developing lighting scenarios.» 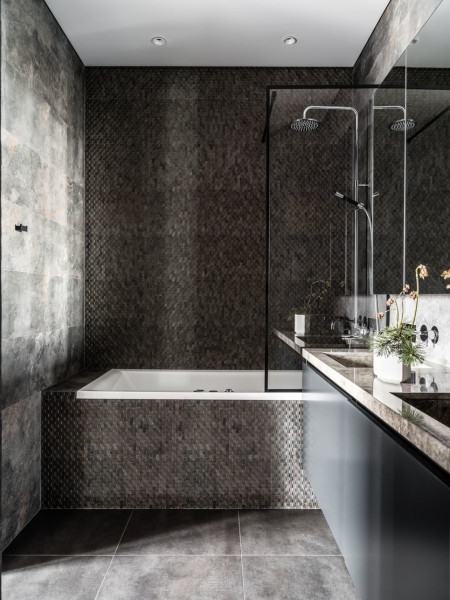 When designing the bathroom, the designer took into account the unusually high height of the owner of the apartment. Therefore, the bathtub, sinks and shower are installed high enough. 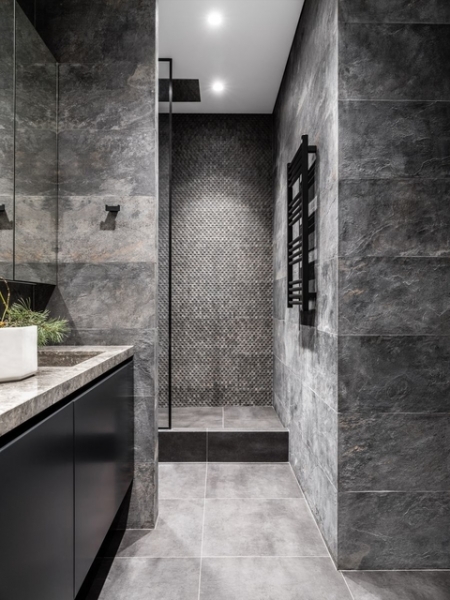 The shower area deserves special attention. In addition to the wall-mounted shower, there is a ceiling rain shower. A huge flow of water from three points at the same time is an excellent solution for those who love water treatments. Shower partition, Pro Steklo. Faucets, Cisal. Porcelain stoneware, Porcelanosa. Sinks, Stone Style. 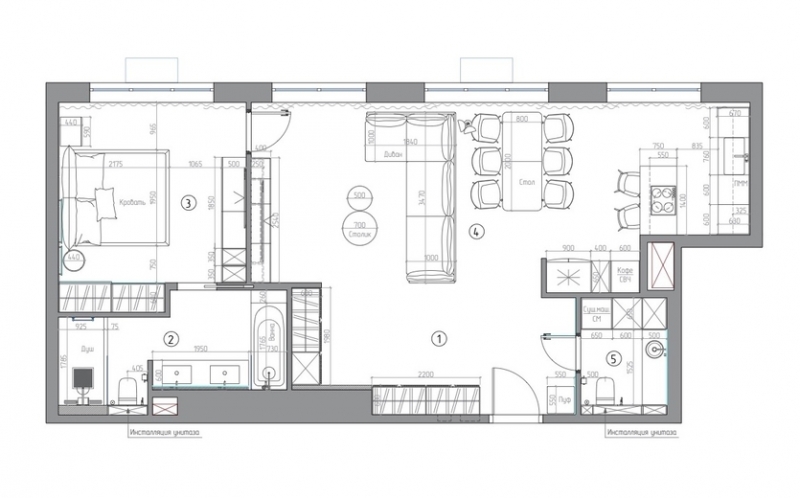