If you believe that the seven-star hotel — the Burj Al Arab sail — is still the most expensive, then this is not so. He’s only in ninth place. Let’s tell you who is above him.

The list of hotels with the maximum price for accommodation changes annually, new ones appear, but the old ones also keep the brand. If a couple of years ago the hospitable complexes of Turkey could boast of a place in the list of the most expensive hotels, now they no longer do. Glorious Mauritius was in 7th place last year, and this year it has already been pushed back. We are looking at chic options.

Not just a luxury hotel, but a cultural phenomenon on a global scale with a century-old history and an incredible constellation of famous artists, musicians, artists, fashion designers. Having opened in 1913, Plaza Athenée was already designed to be a success. The project of the respected architect Charles Lefebvre, the location in close proximity to the Champs—Elysees, the best view from the windows in Paris, the highest level of service — this was the calculation at the beginning. And only then this place was overgrown with such a history and such names that it is simply incorrect to call it something other than the palace. 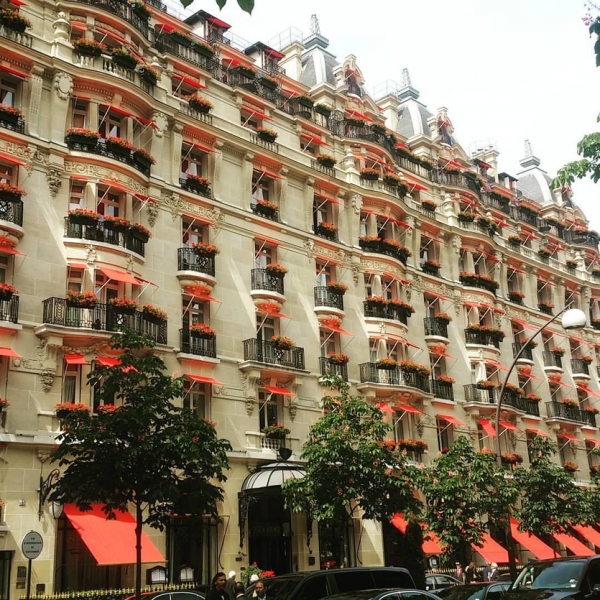 Christian Dior opened his first boutique in 1946 right here, on Avenue Montaigne, counting on the guests of Plaza Athenée. He was a regular customer and held many photo shoots of his new collections at the hotel, as well as their glamorous runway shows. So Avenue Montaigne became known to the whole world as the «Avenue of Fashion». And in the 60s, this place was particularly popular with movie stars of all kinds, because it was the golden age of cinema.

A spacious dressing room, Guerlain toiletries, luxury linen with Beltrami embroidery, daily fresh flowers in the room, a capsule diffuser with natural essential oils in the bathroom, a free newspaper to choose from — this is not a complete list of what a luxury room in this pearl of Paris can please a guest.

Since its grand opening on December 30, 1936, Le Relais Plaza restaurant in this hotel has become the most popular place in Paris. Just imagine the parties, the room filled with fashion designers and musicians of that era who could not resist turning to the piano. Today it remains the main address on Avenue Montaigne.

Le Relais Plaza is one of the last remaining Art Deco restaurants in the city, and this spirit of the turbulent 1930s lives on to this day. Pay attention to the original frescoes by Diane Chasseress and stained glass windows with engraved zodiac signs.

A day in the royal suite — about 1.5 million rubles, in the presidential suite — 1 million

The most famous hotel in the Emirates, which everyone already seems to know. Children will learn about it in geography lessons. For adults, this is the first image that pops up in the mind at the mention of Dubai. Of course, the lion’s share of the success of this project is the shape of the hotel and its location. Having settled inside the bay on a bulk island not far from the shore and having the shape of a traditional sailing boat, the building became a symbol of the poor fishermen who once lived in these places. This image of a boat in the bay has sunk into the soul of tourists from all over the world so much that now there are no empty seats in the hotel.

Even the status of the world’s first seven-star hotel does not attract tourists as much as the fact that they will live in a sail. 23 years have passed since the opening, all millionaires have already been here, and not once. Maybe that’s why the price of living here has decreased somewhat compared to previous years. 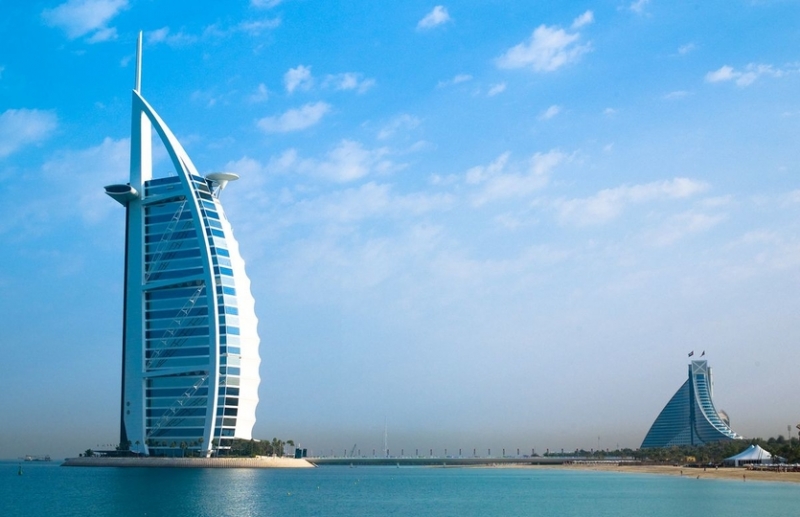 So what can we expect for 1.5 million rubles a day? The main thing is that the room itself is not small — a two-storey penthouse with an area of 780 square meters. Of course, full-size windows with the best sea panoramas of the Persian Gulf.

Interesting unusual bonuses (not all) 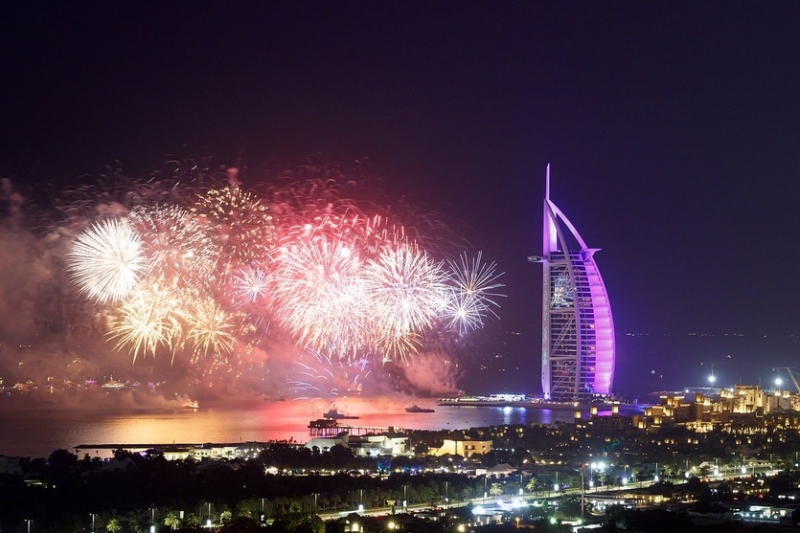 A very luxurious CINEMA penthouse, although not the most expensive — 300,000 rubles per night. Empathy Suite — from 2.5 to 5 million rubles per day

Palms Casino Resort has gone down in history as the first resort in Las Vegas, fully owned and operated by an Indian tribe. The luxury hotel occupies two separate towers with 766 hotel rooms and suites, a diverse mix of bars, restaurants, entertainment venues and a gambling lifestyle in one of the most luxurious casinos with an area of 9,000 square meters. 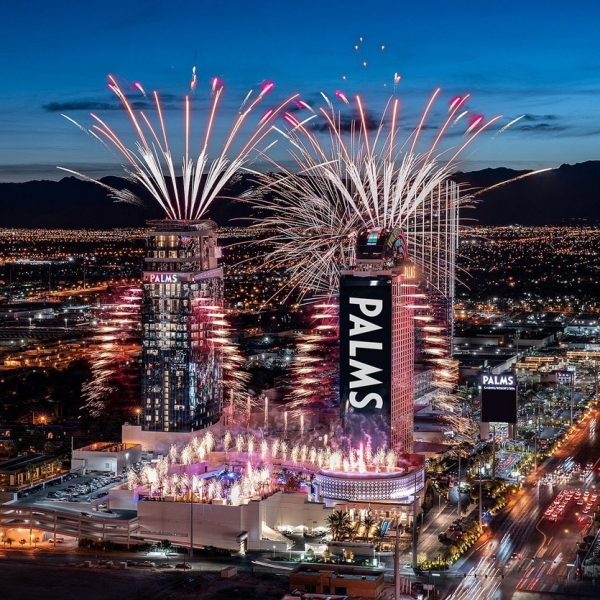 Vegas is a place where people come specifically to spend money. Of course, the hotel is no longer visited because of the view from the room, but to surrender to the passion for gambling. Such an abundance of luxury slot machines cannot be found anywhere else. Only in the main hall there are a little more than one and a half thousand of them. But there are still lower floors with high-stakes vending machines. Wealthy people usually prefer more traditional roulette, baccarat, blackjack and poker. Palm Casino is considered the best blackjack casino in Vegas. 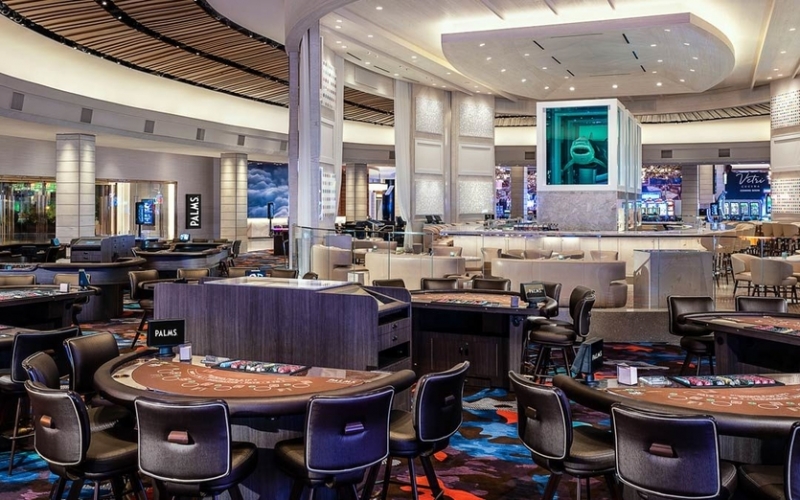 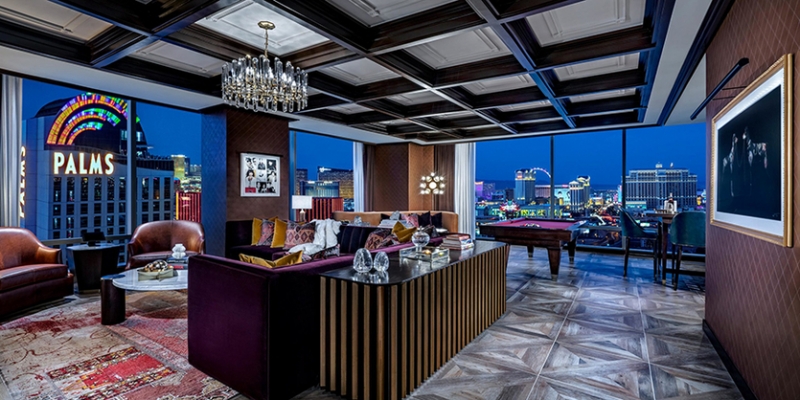 A very luxurious CINEMA penthouse, although not the most expensive — 300,000 rubles per night. Photo: Palms Casino Resort

The unique Empathy Suit room is essentially an inner world, an exhibition by the famous British artist Damien Hirst. One of the highest-paid masters of art installations, Hirst filled this two-story penthouse with his works from different years, the most famous: sharks in an aquarium with formaldehyde, a pharmacy, a diamond skull and others. 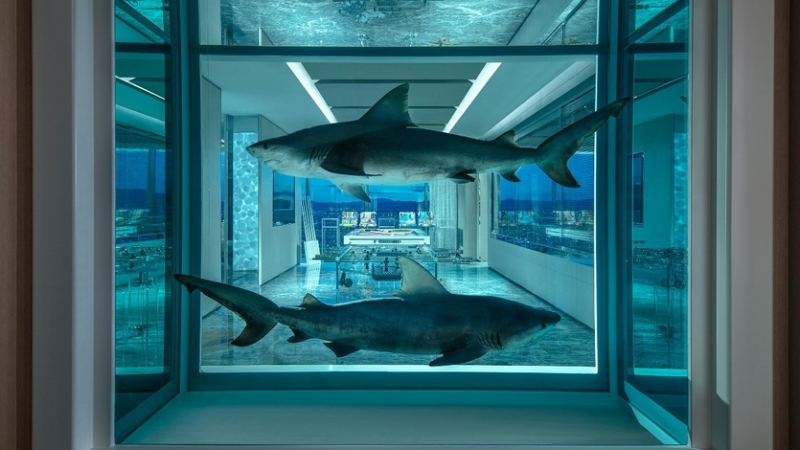 Along with them, there are also completely unknown, unique ones made specifically for this sky villa. That is, in this case, you are not paying for unique services like an individual round-the-clock butler (although you are also entitled to one), but for the opportunity to live inside a work of art consisting of other works of art.

The most luxurious hotel on the French Riviera, opened almost a hundred years ago, and today does not lose its luster and inspires, infects with a thirst for life and remains the most valuable pearl of this coast. Interior designer Pierre-Yves Rochon worked on updating the appearance of the hotel, remaining true to the basic principle — hedonism, love not only for life, but also for the sea, the coast, the Croisette. 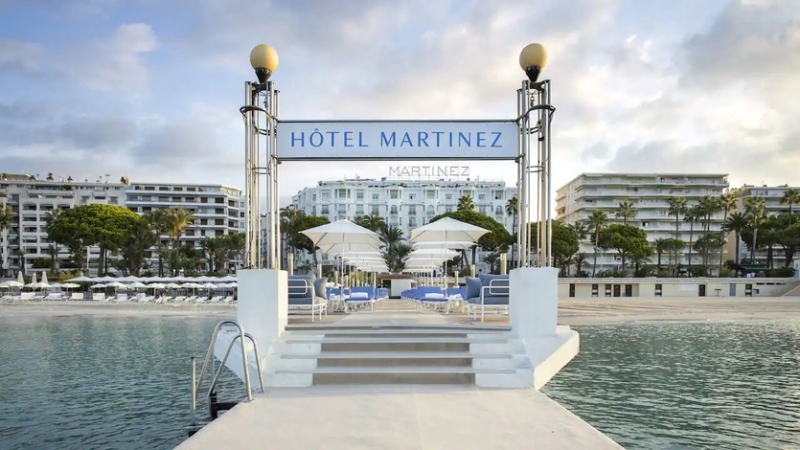 Pierre-Yves Rochon created the penthouse inspired by the theme of cinema. It is not for nothing that in this rather large space the division into female and male parts, called Actor and Actress, is conceived. The rooms are filled with works of art by famous Europeans. 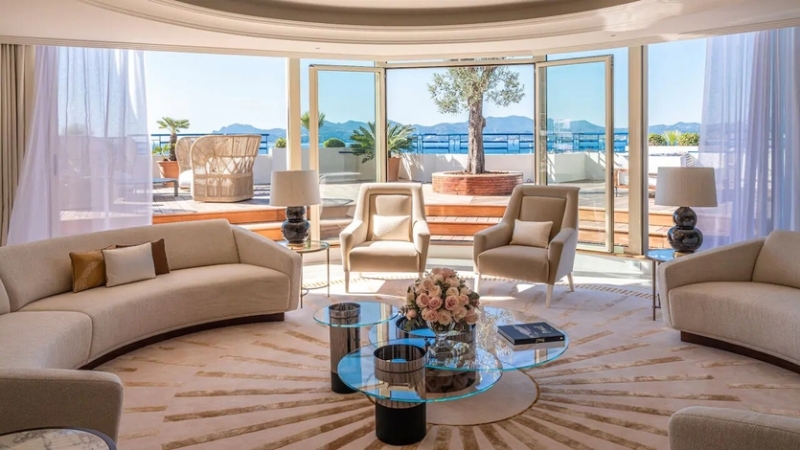 There is a gorgeous outdoor veranda with a Jacuzzi and an incredible view of the Gulf of Naples and the Croisette embankment. And, of course (we almost forgot him), an individual butler. 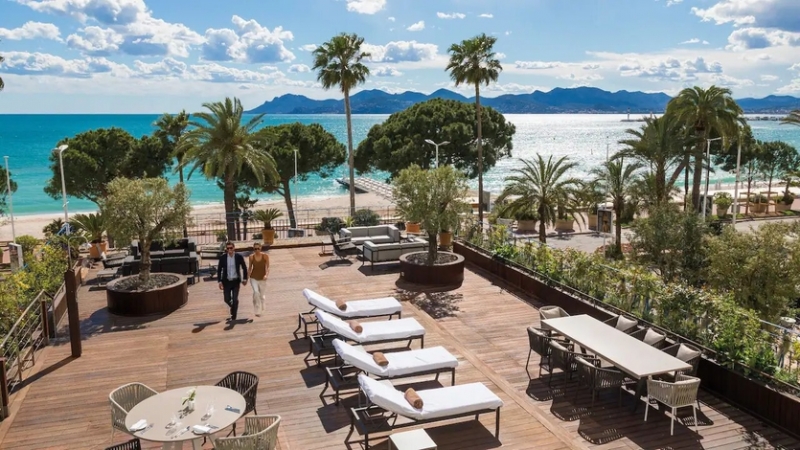 Greece is traditionally considered a country of barefoot tourism, where, following the heroes of the musical «Mamma Mia», people prefer to settle in the cheapest hotels. But, thank Hermes, not everything. In this country, you can find apartments for wealthy tourists. 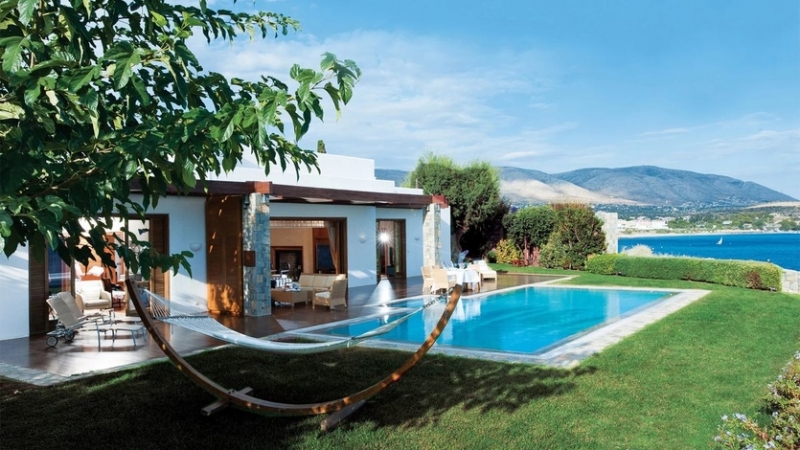 Royal Villa will allow you to enjoy the real Greece away from the crowd. This villa is not chasing luxury penthouses, it is a luxury cottage, a place where you can smell the sea and taste the tranquility. It’s nice to sit with a book by the fireplace or just roast meat on the terrace. 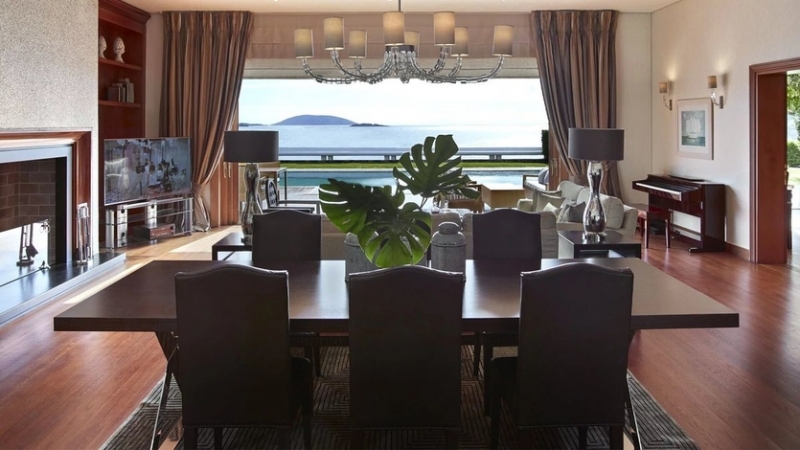 Of course, the villa is equipped with everything necessary for a relaxing holiday on the coast: swimming pools, one of which is heated, a spa, huge bathrooms decorated with rare marble, as well as a private path to the sea and a decent territory. There are rooms for the whole family and servants. 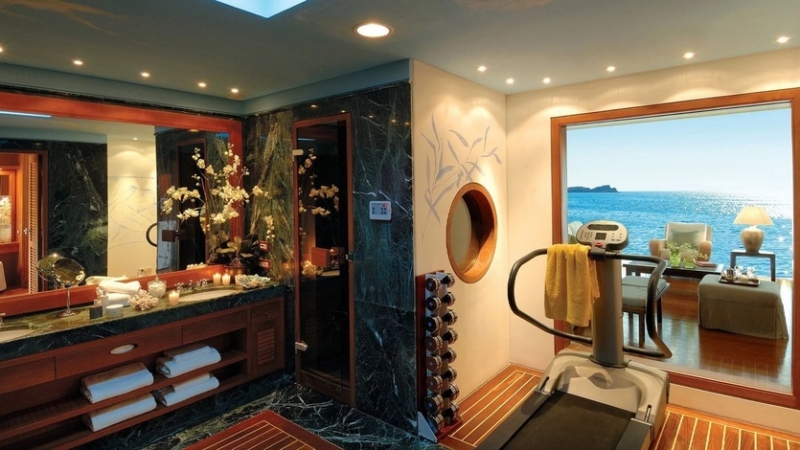 The villa costs 3 million rubles per night, but no one comes here to spend the night. They usually settle for a couple of weeks

A small private tropical island — what could be more boring for active tourists. But for wealthy millionaires who are tired of the frenzied pace of life, this is paradise. The hotel offers its guests non-trivial activities in a wide range, ranging from kayaking and snorkeling to golf, fishing on luxury yachts and horseback riding. 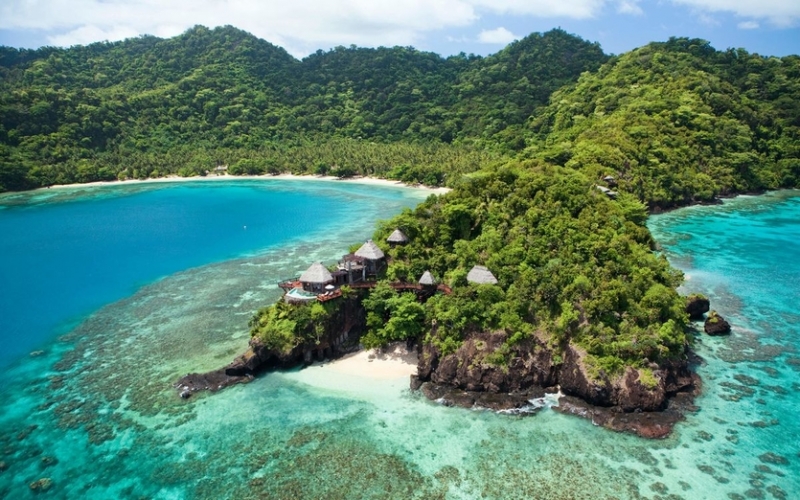 The high cost of the most luxurious villa is due to the fact that for this money you get «three in one». These are three full-fledged villas, each of which has a swimming pool, several rooms and an amazing jungle around. 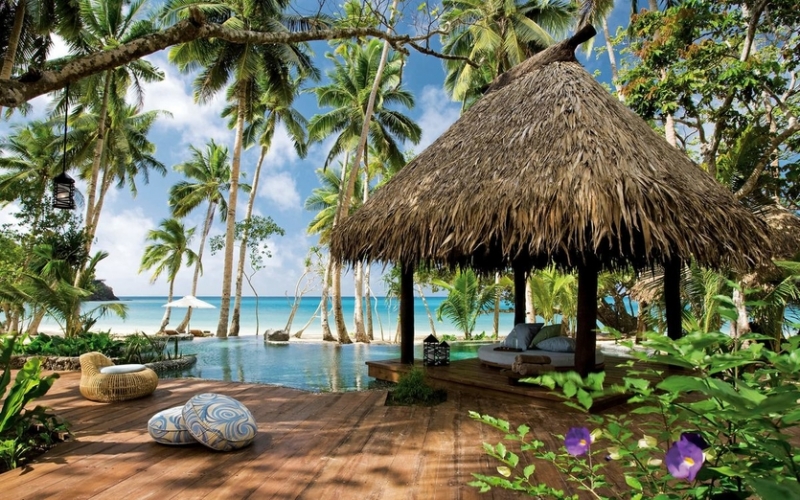 There are several first-class restaurants on the island, where they try to cook mainly from local products. And all the inhabitants of the island are numerous hotel staff. 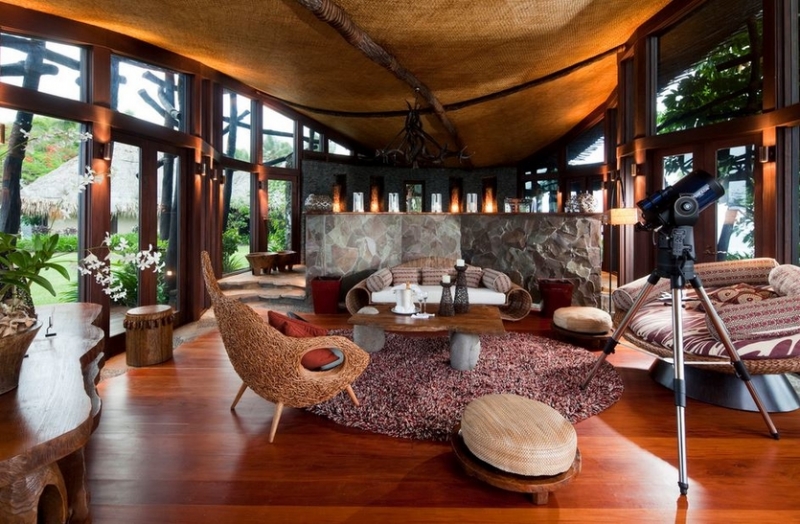 It was built in 1727 and is positioned as a historic hotel. But what is there historical! It’s just a real palace where the royal family really lived and hosted guests. Now Princess Jayendra Kumariji, the current owner of the «Raj Palace», has restored it, turning it into a boutique hotel with 40 rooms. 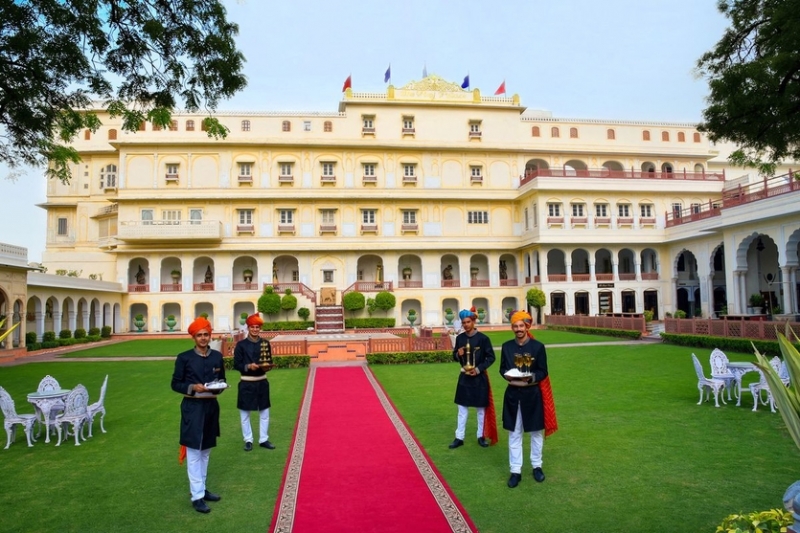 The Presidential Suite houses an impressive museum presenting household items and telling about the heritage of India. The rest of the rooms also have antiques and artifacts from the collection of the royal family (and even a throne).

As entertainment, various performances are periodically held in the palace: theatrical, dance, etc.

From the unusual: they give you to sit on the throne and ride an elephant. And, of course, a personal butler will also be issued. 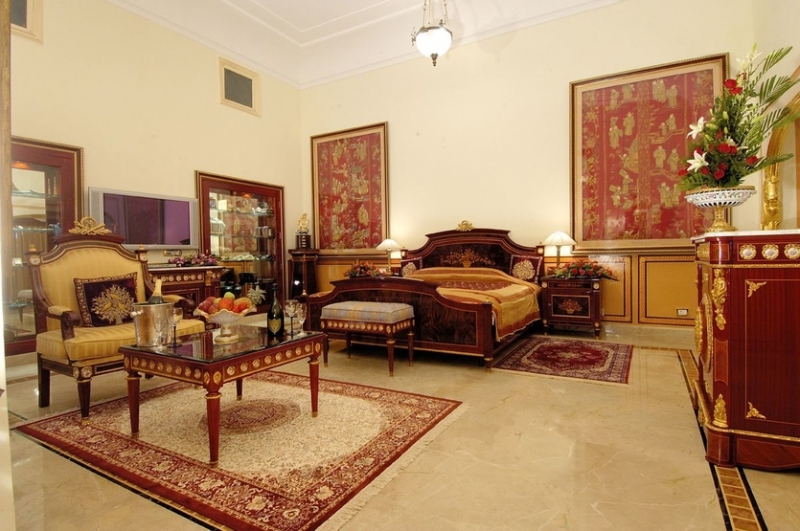 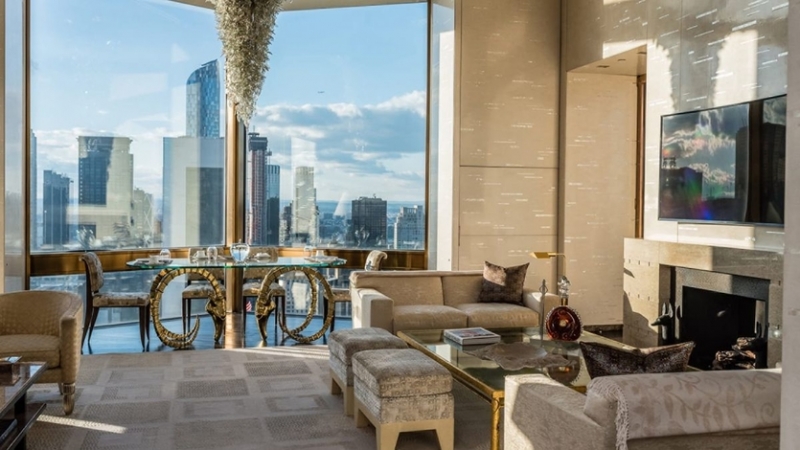 The named penthouse was the result of the joint work of Yumin Bay, Peter Marino and the owner of the hotel Ty Warner. In honor of the latter, in fact, it is named.

The best location in Manhattan and the magnificent view are worth paying a lot of money for it. The apartment on the 52nd floor has four glazed balconies from which you will enjoy viewing New York’s Central Park. 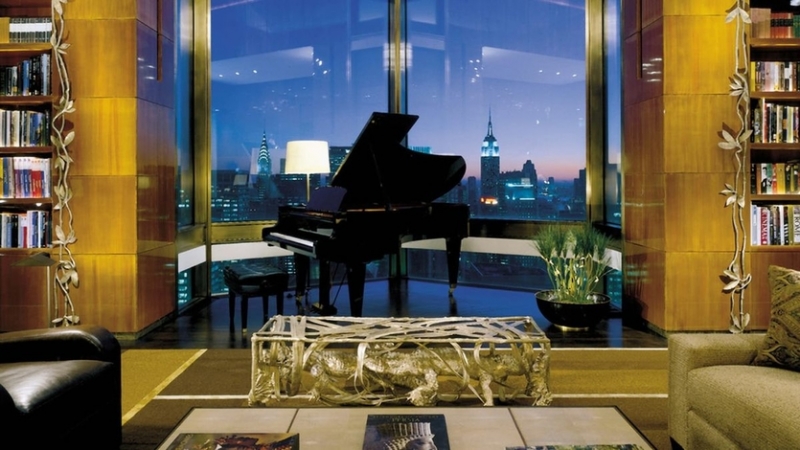 For the third most expensive hotel in the world, the list of unique features should be very impressive. He is exactly like that.

What will surprise you? 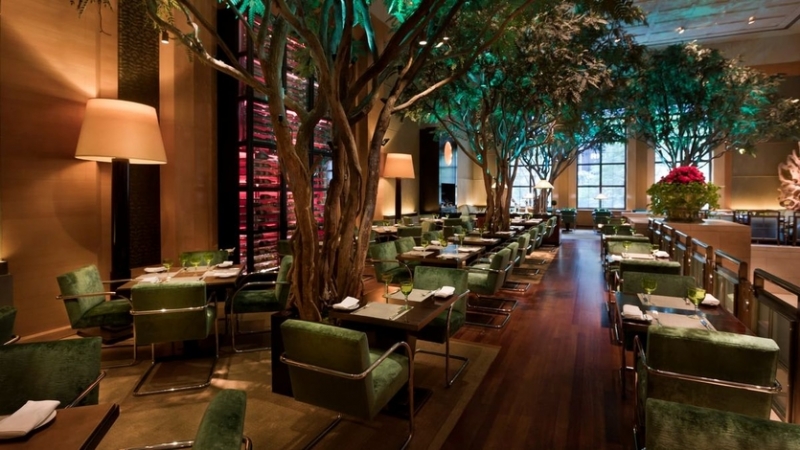 4.2 million rubles per night in the Royal Penthouse Suite 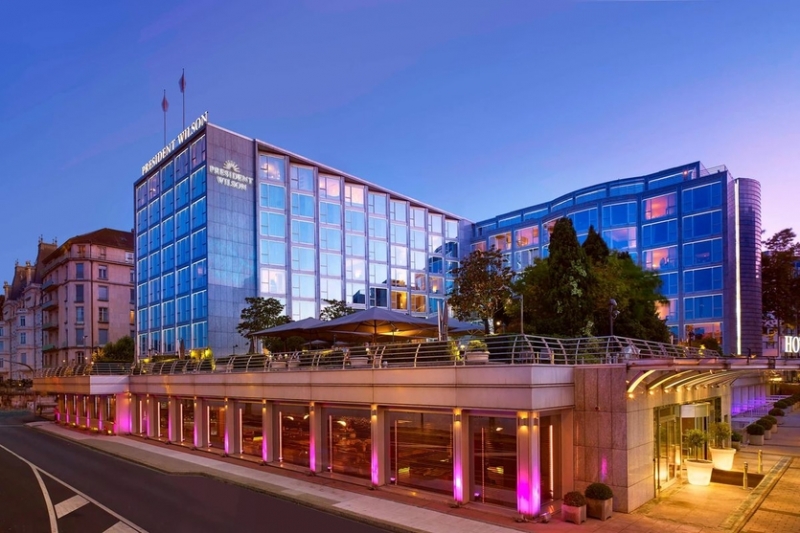 The top price tags of hotels are headed, of course, by Switzerland. Almost all the leaders of existing countries and four dozen millionaires stayed in this penthouse. For such high-ranking persons, the unique features of the hotel (such as, for example, armored windows) are a necessary security standard. 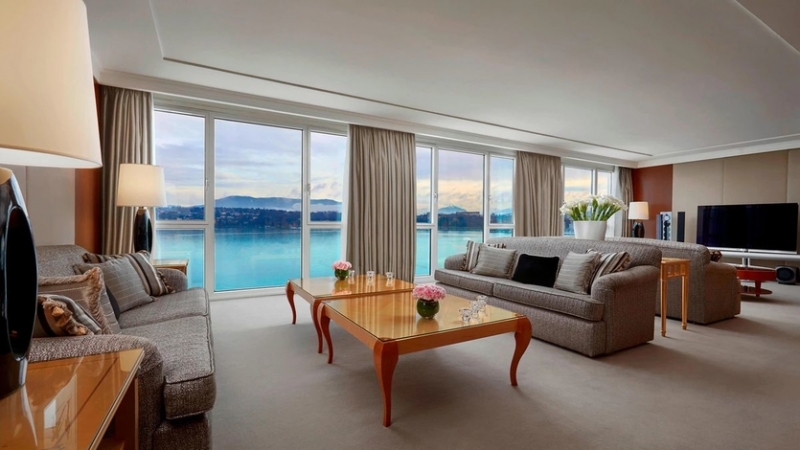 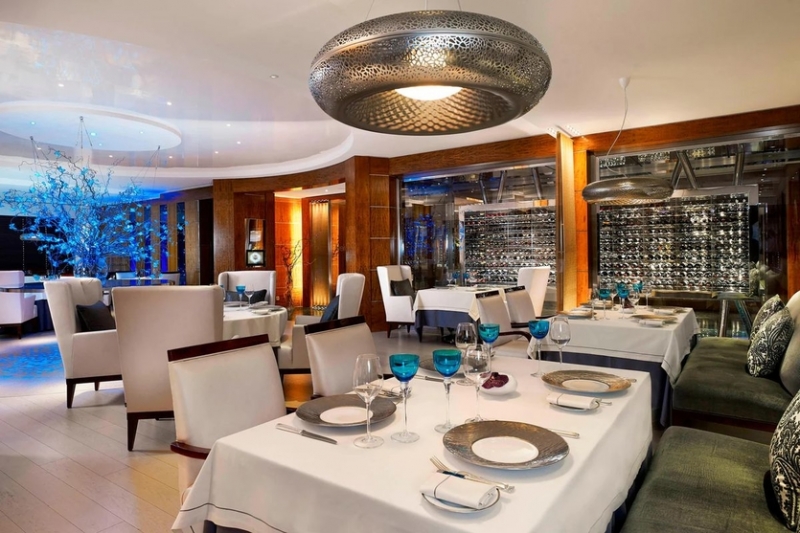 Daily is not chartered, but the calculation is based on 8 million rubles per night

This is the most secret holiday destination of all those listed on our list. The level of secrecy is off the scale, cooler than the Geneva President Wilson. There is practically no reliable information. The only thing that is known for sure is that it will be very luxurious to «lay low» in this way. The team includes not only a butler, but also a chef of the highest category. And, of course, the whole team signs documents on non-disclosure of information about the guests. 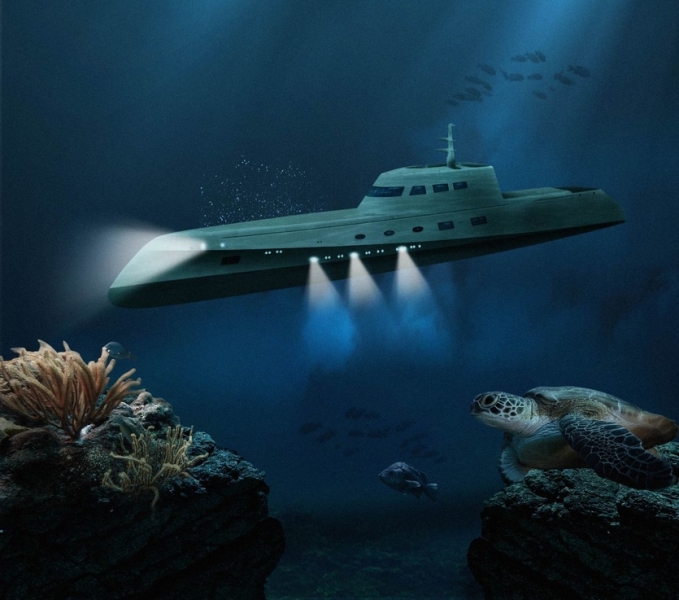 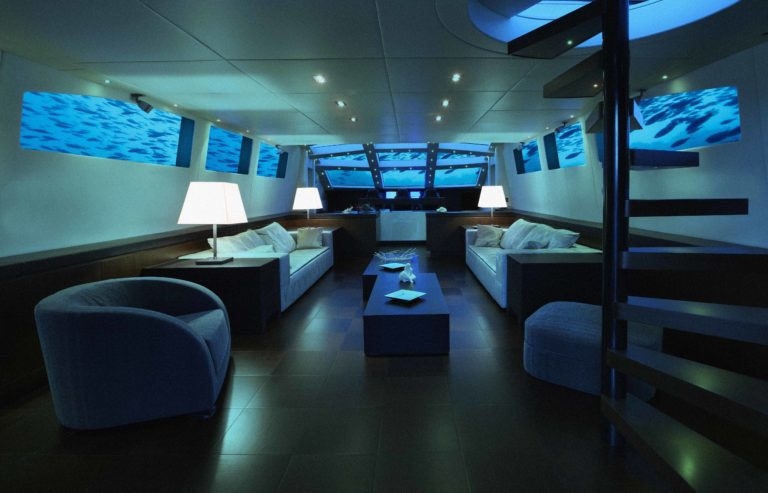 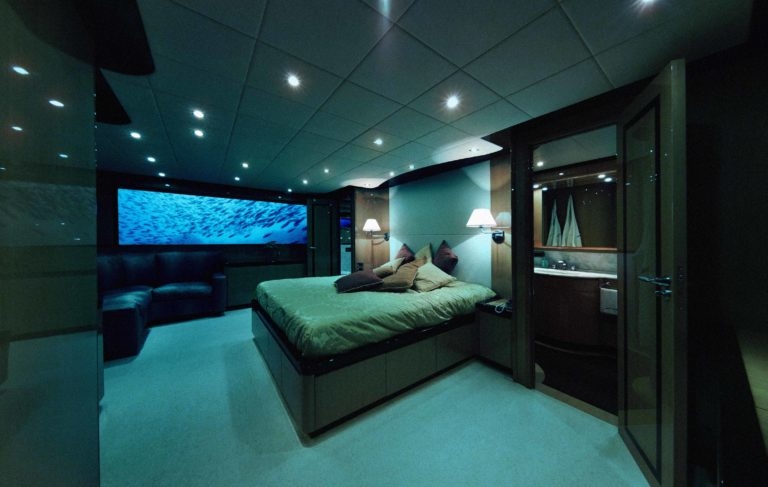