Designer Anna Clark created this bright, modern, laconic interior out of time instead of the one in which the family and daughter lived before.

We want the interior to work for us, not us for him,» — with this phrase, the first meeting of designer Anna Clark with the customers of this project began. For them, this was the second renovation — before that, the family lived in an apartment in a classic style in a dark color scheme. They had specific wishes for the interior of the new apartment: so that the situation did not repeat the previous one and only modern finishes were used in it — this time they wanted more modern solutions, a light and neutral palette, a functional design beyond time, relevant for many years to come. 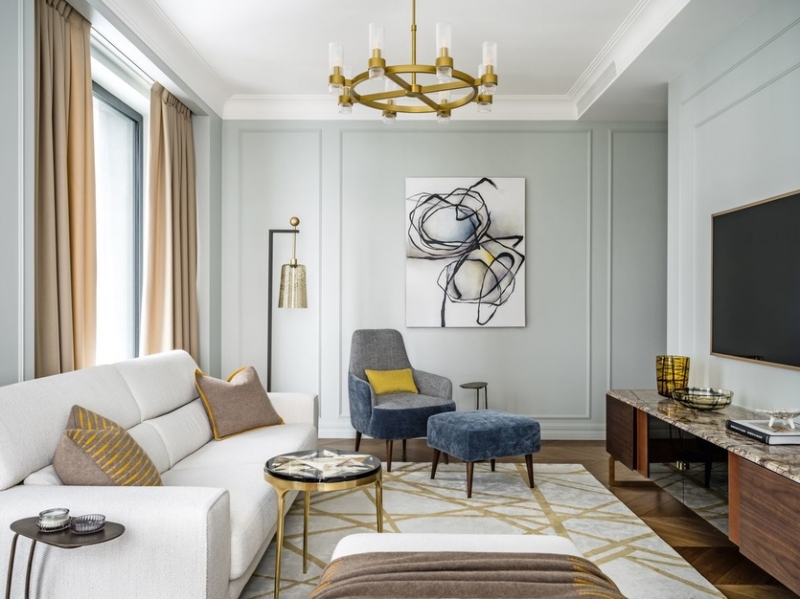 For the hallway, kitchen and living room, the designer chose one color — gray with a greenish undertone and accents in shades of brass and ochre. Sofa, armchair and pouf, all — Ditre Italia. Abstract painting in the central Boiserie, That’s Living. Floor lamp, Roche Bobois. 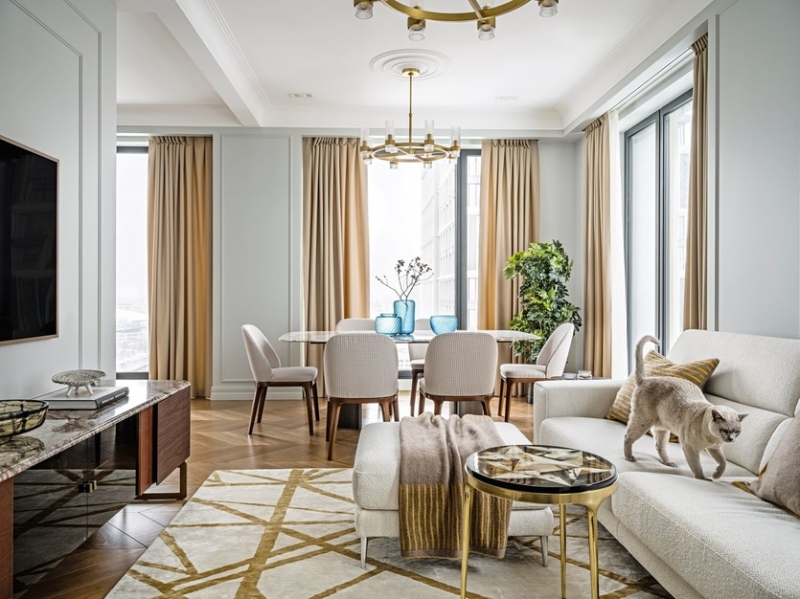 This apartment in the Moscow Prime Park residential complex was bought by customers with a White box finish, partitions were already built in it and wiring was laid. Initially, Anna was faced with the task of visual content, but she still implemented several functional solutions. For example, I increased the kitchen area at the expense of the island, expanded the boundaries of the guest bathroom to put a washing machine and dryer there, and instead of the fourth bathroom I made an additional dressing room. On an area of 130 sq . a master bedroom with a bathroom and a dressing room, an office and a children’s room with a private bathroom, as well as a single public block of a kitchen-dining room-living room, passing into a hall with a large built-in closet. 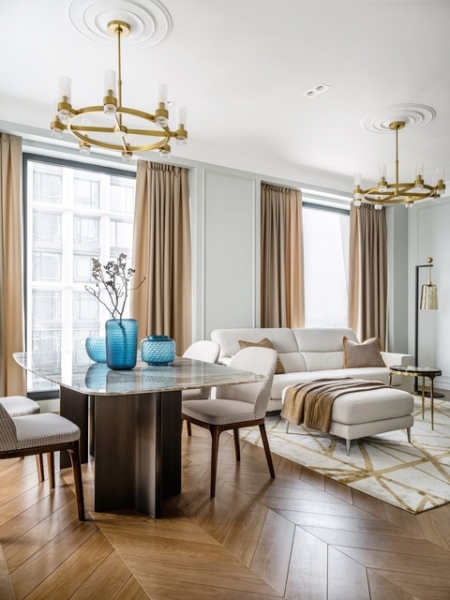 Paired Generation Lighting chandeliers in molded rosettes zone the living room and dining room. The floor is laid out with parquet (Geopark) with a classic layout «French Christmas tree».

The peculiarity of this apartment is 8 panoramic windows with views of Moscow around the perimeter of all rooms, so the space is literally permeated with the sun. For the convenience of using curtains, the author of the project has installed a system of electric curtain rods with soft lighting, which creates a cozy atmosphere in the house in the evenings.

Due to the island, the storage space in the kitchen has increased and an additional point for breakfast and quick snacks has appeared when you do not want to sit down at the dining table. Bar stools, Eichholtz. 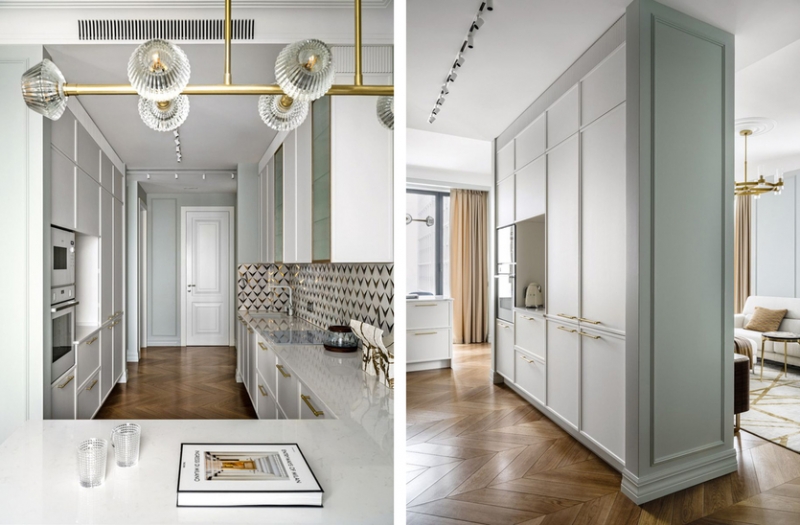 The view from the windows of the Dynamo district and the architectural solution of the residential complex itself largely influenced the design concept. High-tech towers with graphic colored facades are built into the buildings of the Stalinist Empire. So in the interior, Anna made a bet on modern minimalism with clean, understandable solutions. And the reference to the classics and historical surroundings is neatly expressed through plaster moldings on the walls, ceiling cornices and interior doors with classic panels. 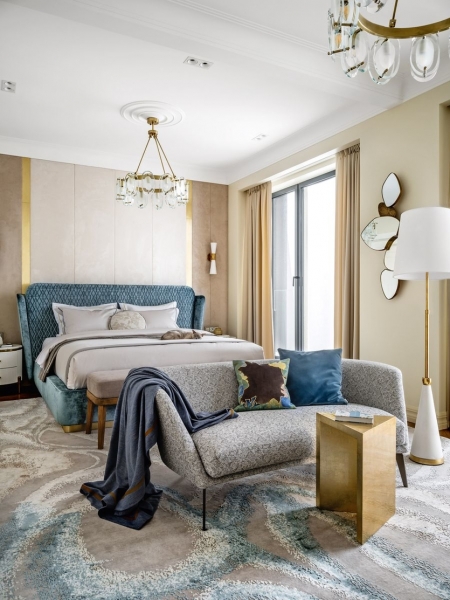 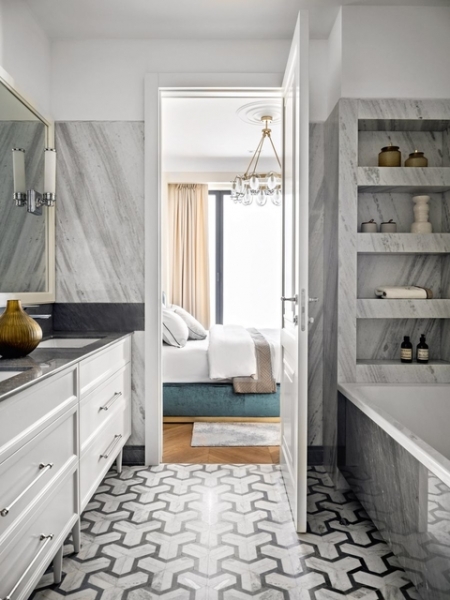 Customers dreamed that the bathrooms and the hallway were decorated in natural stone. «We have done a lot of work — from the moment of choosing slabs to agreeing on the most detailed drawings of the cutting and subsequent installation of the stone on the object,» Anna recalls. On the bathroom floor there is a complex marble mosaic, Venezia Stone.

The customers wanted to see a calm design project, without expressive colors and textures — counting on the fact that it will not lose its value if they decide to sell the apartment in the future. The light neutral palette was diluted with shades of blue and turquoise, which the hostess likes, so the headboard of the sea—green bed and the blue armchair in the living room appeared in the bedroom. There was an idea to paint one of the walls in the public area blue, but after seeing the 3D visualization, the customer refused in favor of a light monochrome paint. The hallway flows smoothly into the depth of the apartment, the kitchen and the living room, so the designer wanted to combine them with one coloristic solution — light gray with a drop of green. 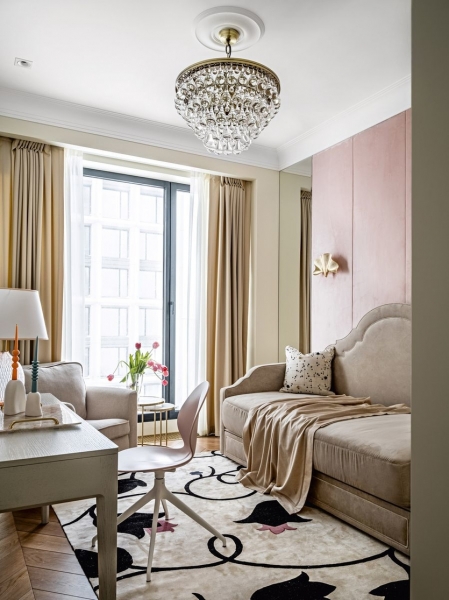 «At Milan Design Week this year, I remember examples of complex combinations of color, material and texture. Glossy lacquer surfaces of glass, ceramics, wood are adjacent to soft, tactile pleasant fabrics — leather, velvet, boucle, fur, — says Anna. — In this project, I also used a large number of different textures for the first time.»

The designer has carefully worked out the decoration of natural stone in the bathrooms and hallway. The alcantara decorative panels with mirror and brass inserts decorating both bedrooms had to be mounted precisely to the size of the walls. And their color, in turn, had to completely coincide with the built-in joinery and the color of the walls. «All this required a lot of time, great scrupulousness, attention, detail and, of course, well—coordinated work of contractors at the facility,» the author adds. 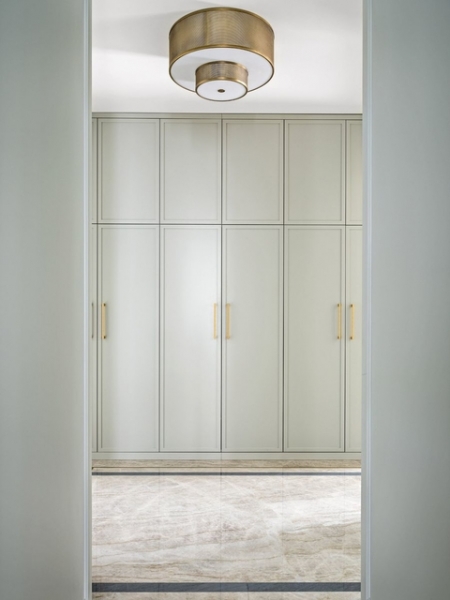 Built-in storage system in the hallway. On the floor — quartzite Venezia Stone with an insert of marble and brass. Lamp, Chelsom.