Our material contains simple and effective rules that allow you to create a single visual and atmospheric space of the bedroom and bathroom.

The bathroom is a unique space for self—care, the place where a person remains alone. Therefore, it, like the bedroom, should correspond as much as possible to the personality of the owner, his habits and scenarios of his behavior. Any designer first of all thinks about the convenience of the customer: from the point of view of practical use and visual perception.

Let’s start with the combined spaces, where the designer decided not to separate these zones initially. As a rule, the bathroom is separated only by a formal partition.

Bathroom in the bedroom

In one of the guest bedrooms of the house in Dagomys, Elena Paunich embodied such an idea. The Jacuzzi hot tub is installed in the common space of the bedroom-bathroom and is separated from the sleeping place by a small partition. The TV is installed in such a way that you can watch it while taking a bath. 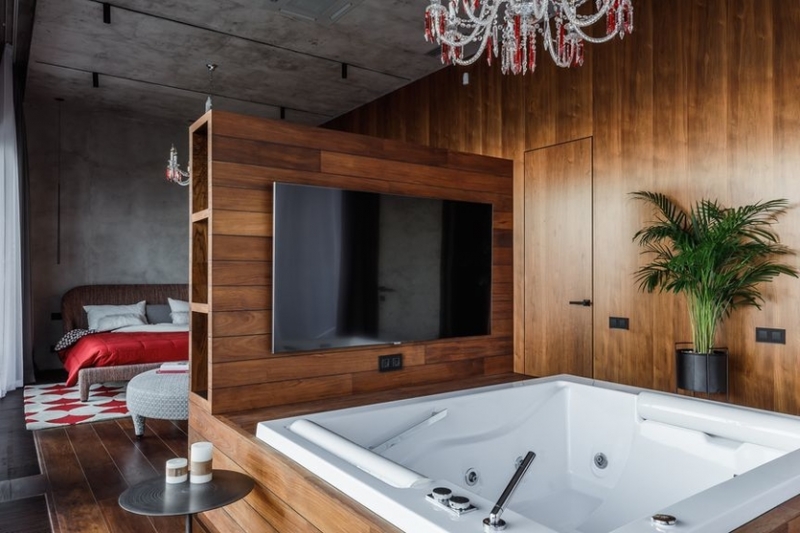 The bathroom in the apartment project in Yekaterinburg is adjacent to the master bedroom. The wall between them is completely transparent. Alexander Voronov, the author of this project, filled the space with light as much as possible. Firstly, there are two windows in the bathroom area: in the shower and near the bathtub. And secondly, the transparent wall adds light from the panoramic windows of the bedroom. 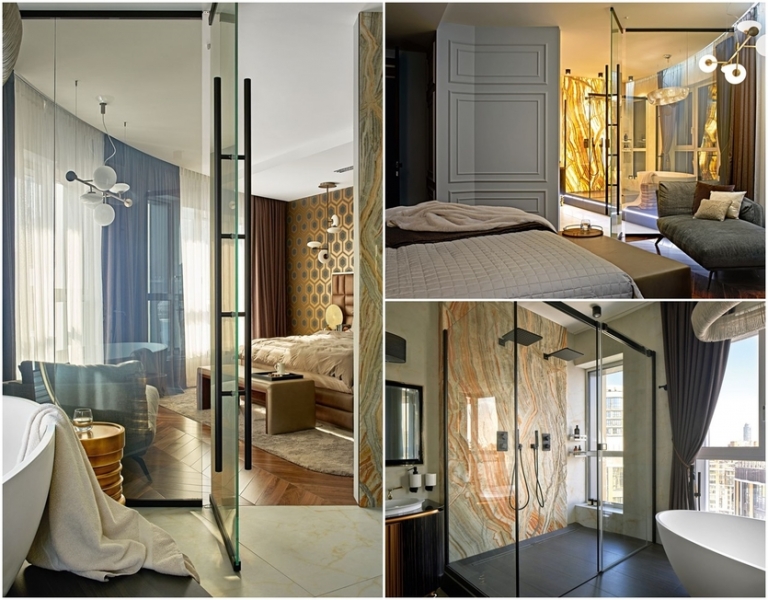 The author of the project: Alexander Voronov. Photo: Mikhail Pomortsev.

Designers Daria Goryacheva and Alexey Vyazminov also resorted to such a space solution. In the Moscow apartment according to their project, we see a transparent glass wall between the bedroom and the bathroom. In this case, it also allows you to expand the visual volume of both rooms. At the same time, the bathroom becomes an interior decoration. The incredibly beautiful marble pattern is mesmerizing. Of course, the creators had to think carefully about which part of the bathroom would be visible. First of all, we tried to achieve a harmonious composition of the picture and the absence of visual noise. 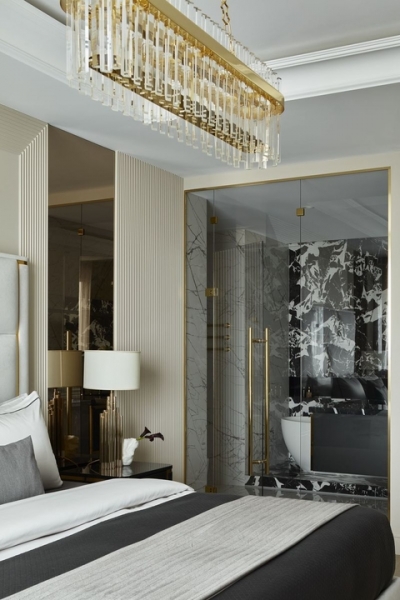 The owners of this apartment can not only admire the fireplace while lying in the bathtub, but also lying on the bed to look at an unusual panel on the wall in the bathroom. A large and high window between the bedroom and the bathroom makes the two spaces connected.

«We wanted to make the space bigger both from the point of view of the bedroom and from the point of view of the bathroom, giving it natural light,» comments Mila Uzikova, the author of the project. — The owners love the fireplace, so we placed it above the bedside table in the bedroom and made a window directly above the bathroom. The glass is with smart technology, and can become tinted at any time. Thus, when the window is transparent, a resin panel can be seen from the bedroom, and from the bathroom you can watch the fireplace fire.» 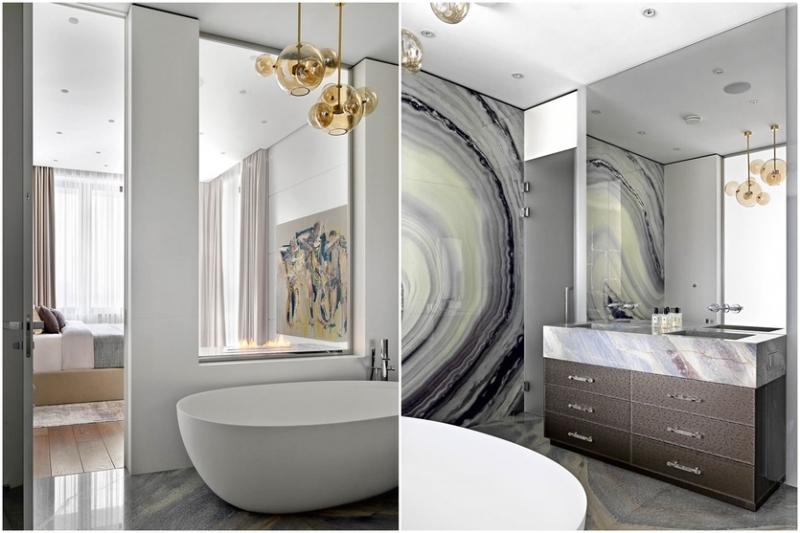 Visual unification of bedroom and bathroom

A more frequent option is en-suite bathrooms, that is, located next to the bedroom, but still separated by walls. Since both of these rooms are decorated in a color scheme close to the owner of the room, they are usually made consonant with each other. Such unity is achieved by three main methods:

The most common way for Russian designers to visually combine the bedroom and bathroom spaces is to combine the color scheme in the decoration of rooms.

This is one of the bedrooms in a house near Moscow. The wall at the head of the bed is painted in light green, mint color. According to the idea of the authors of the project Ksenia and Nikolai Kruglov, the wall in the bathroom is the same shade. The companion of this color in both rooms are wooden fragments: ceiling beams, parquet board, furniture decoration.

The same can be said about the interiors of children’s bedrooms. In-suite bathroom, as a rule, corresponds to the color scheme of the nursery. Traditional gender differences (pink colors and princesses for girls, and marine themes and blue shades for boys) are now only partially relevant. Today, the style and color of the space is determined by the preferences of the little hostess or the owner of the room. In this nursery, the girl chose a shade of dusty rose, in which the child’s bathroom is also executed.

The author of the project: Asya Zadikyan. Photo: Mikhail Chekalov.

In one of the guest bedrooms of a country house designed by Victoria Lyulina, wallpaper in a basic green color is used. The shade is complex, it can only be described by remembering the color of a Soviet school notebook. In addition, there is a floral ornament in the form of palm leaves on the wallpaper. The tile in the guest bathroom was chosen by the designer to be in maximum harmony with this color dominant. 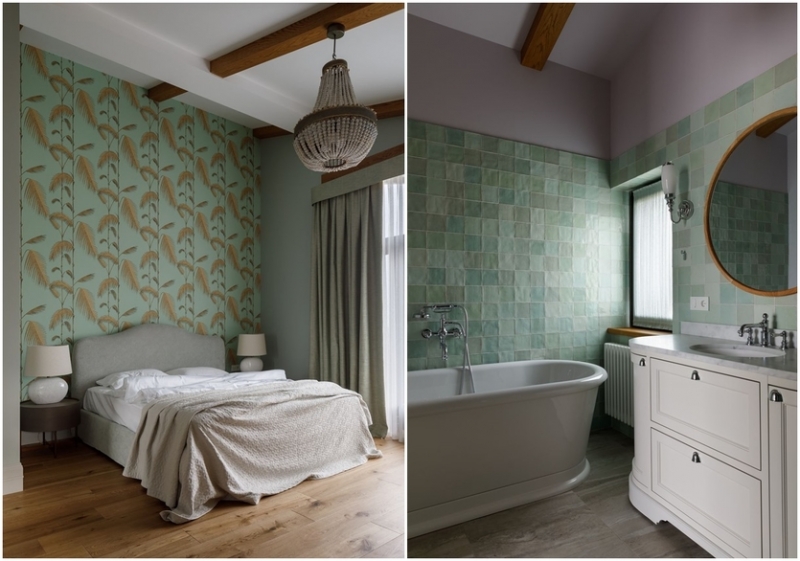 The author of the project: Victoria Lyulina. Photo: Ivan Sorokin.

We can see another intricate palette of colors in one of the guest bedrooms of a respectable mansion on the Black Sea coast designed by Elena Tuisuzyan. The calm pastel tones of the bedroom and bathroom are not repeated, but they echo, enter into a dialogue with each other.

The penthouse in Minsk, created by architect Dmitry Barashko, also uses the same color palette for the semantic unification of the bedroom and bathroom. In this interior, a harmonious combination of shades of gray with noble wooden textures is taken as a landmark. At the same time, the space turned out to be verified, strict and noble. 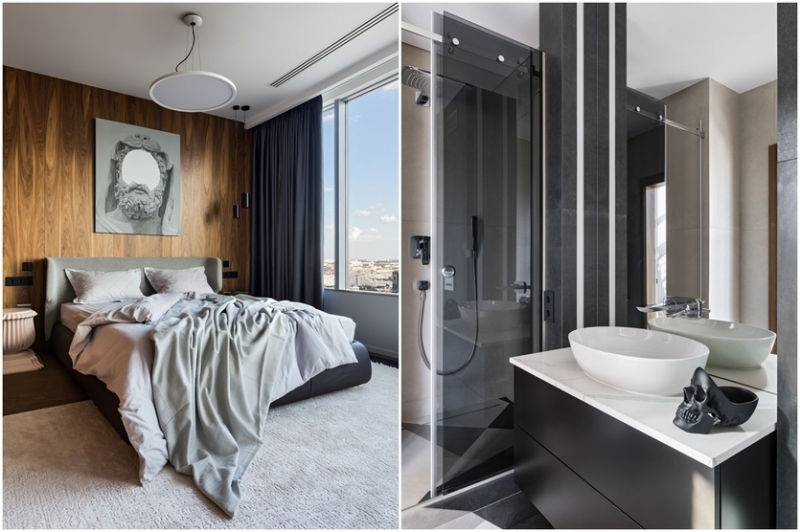 The project of a Moscow apartment made by Vyacheslav Ushakov is not like Dmitry Barashko’s Minsk penhouse. But if you look at their bedroom-bathroom pairs, you get the impression that they are one interior or the interiors are brothers. And all because of the color scheme. Shades of gray in the decoration, noble wood on the wall behind the headboard, black accessories — all these are kind of trigger attributes of a modern men’s bedroom. This interior will appeal to any man. 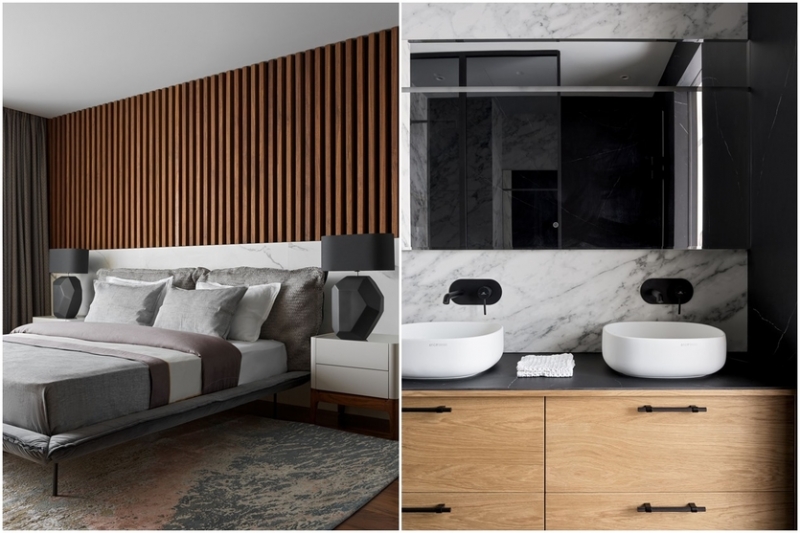 The metropolitan apartment, which was designed by Olga Danilova and Alice Gigolyan, is decorated in beige colors. The private space of the bedrooms is a palette of noble brown shades of dark chocolate, mocha and melted milk. The color is unifying in the bedroom-bathroom duet. At the same time, the variety of textures and materials is fascinating.

Valeria Senkina and Yulia Lenskaya were faced with the task of making their new project especially beautiful and elegant, in a classic style. The apartment obliges to use top-class materials, and the methods of combining the space of private rooms are also different from the usual ones. Here we see a combination of textures. The stucco panel with massive flowers in the bedroom is supported by tiles with a voluminous wavy pattern. In addition, the drawings of marble on the console in the bedroom and the basement in the bathroom echo each other, despite the fact that the varieties and color of marble are different. 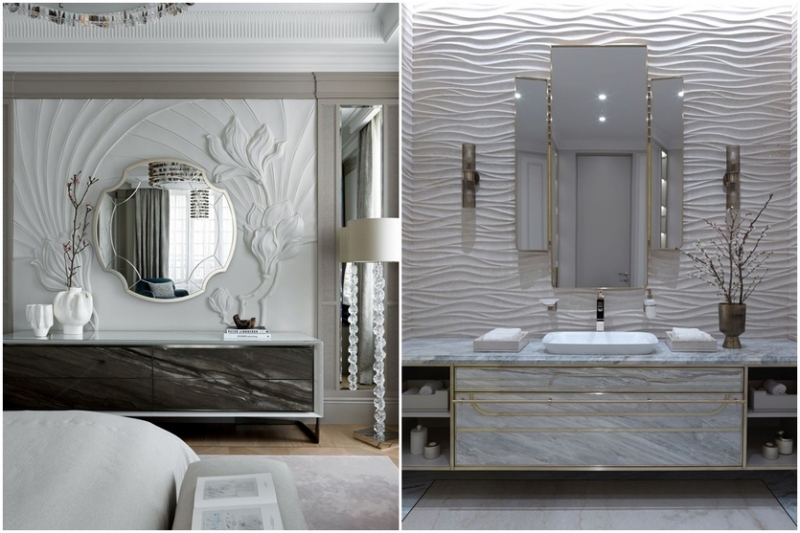 In a mansion near Moscow, the interior of which was created by Kira Golubeva, the main theme permeating all the rooms was naturalness, environmental friendliness. There is a lot of wood in the decoration. In the bedroom, the wall behind the headboard was decorated with natural walnut. It is also used as a base for the sink in the bathroom. 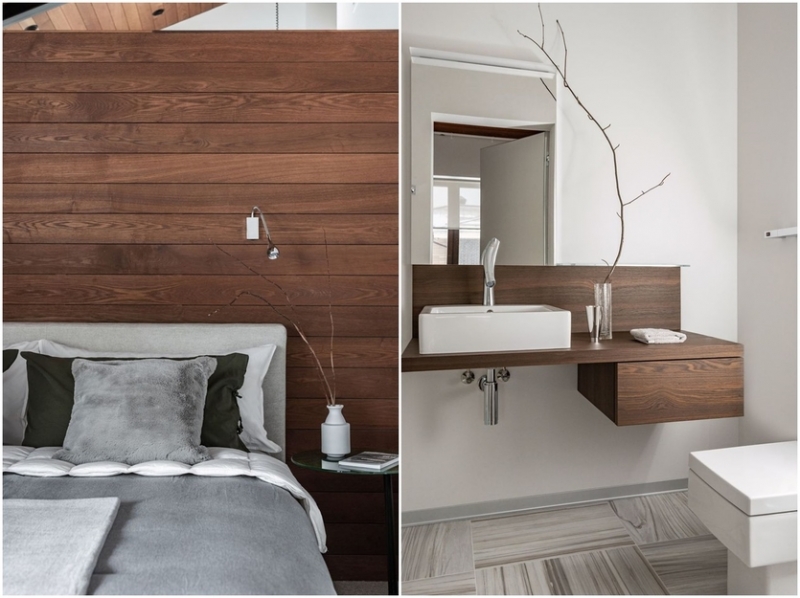 The apartment in Moscow that Sergey Ratchin worked on is completely devoted to the topic of shipbuilding, sea voyages and new discoveries. Therefore, even in the bedroom, the wall behind the headboard is decorated with a parquet wind rose. The feeling of a modern yacht and deck wood is also maintained in the bathroom. 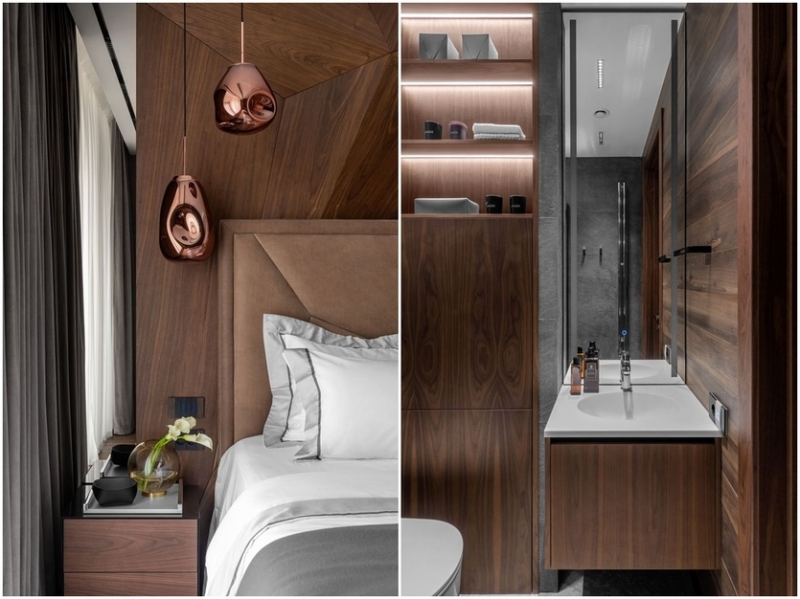 The author of the project: Sergey Ratchin. Photo: Yaroslav Lukyanchenko.

Stas Samkovich and Taras Bezrukov created a classic interior in an apartment on Ostozhenka, in the heart of Moscow. All the rooms are designed in the spirit of modern classics, and it is known to be based on the Art Deco style. It is this style that has become the unifying factor of the bedroom and bathroom. A similar color palette of pastel tones and noble materials define this unity. 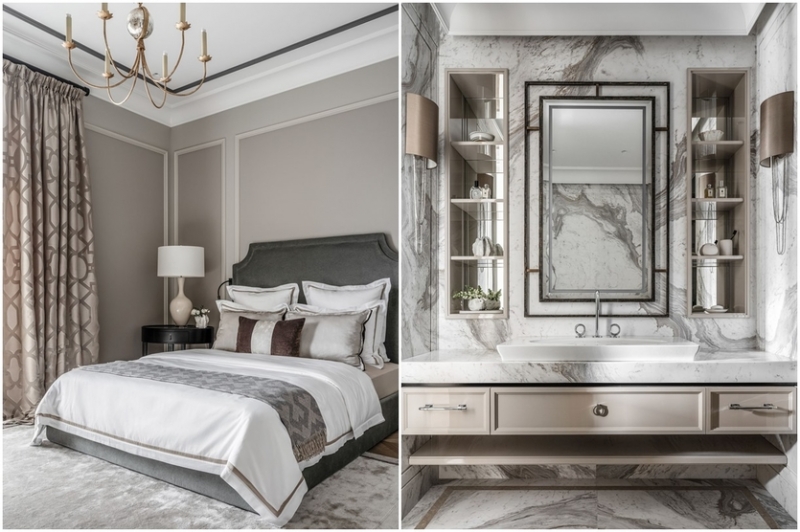 Anna Komleva also worked with Art Deco style in the project of this Moscow apartment. However, a more saturated range is used in the interior. The bedroom and bathroom are made in dark brown colors. Gold edged finishes and accessories enhance the respectability of the space. 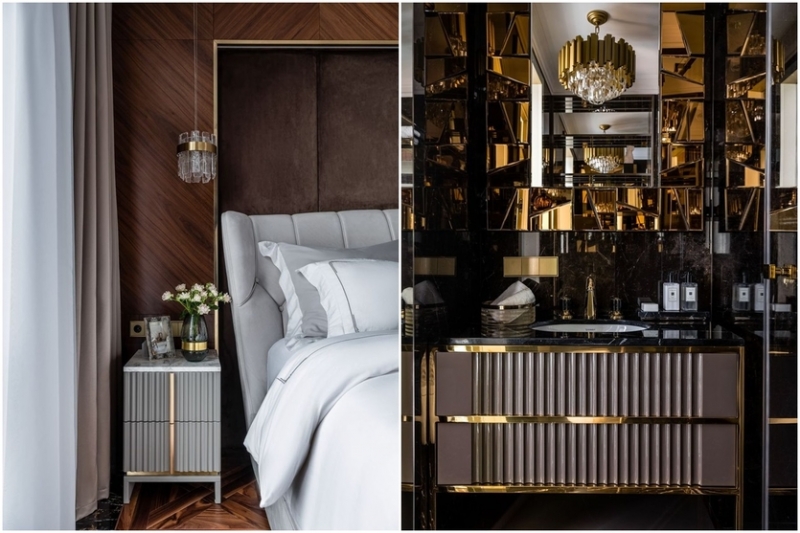